anatomy of a fridge

April 17th, 2011
Here's some random insight into my life, in the form of a snapshot of my refrigerator.
Last night, A (formerly known as Hubby, which I never call him in real life so I decided to change it) and I were going to a party whose invitation said "finger foods will be served." It started at 7 p.m., so I, being me, knew I needed to eat something before then. However, there was NOTHING in the refrigerator that appealed to me. In fact, there was practically nothing in the refrigerator at all! We scrounged up some moderately substantial snacks, but it (along with other things) inspired me to do some hardcore cooking this afternoon. I went casserole crazy this afternoon after grocery shopping and now the fridge pleases me immensely. 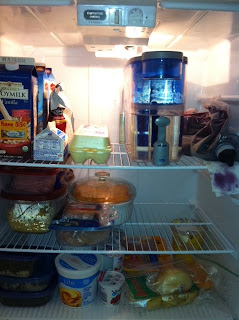 Top shelf, l to r: Copious amounts of soy milk because it was on sale for $2.99 at Kroger and I had a coupon for $2.00 off. Whipping cream for a recipe from Real Simple. Coffee that we ordered from Amazon for around $11 for 4 bags (the other 3 are still in the freezer...). Eggs, because Easter is coming up, and in my family you eat egg salad on Easter. (I think it started because we would use the eggs we had inevitably dyed, but now it just feels like a tradition.) Water. A's classy wine.
Middle shelf, l to r: Year old wedding cake, condensed from its original plate into slices separated by parchment paper (I felt pretty clever for thinking of that). Delicious macaroni and cheese from a recipe by Plain Chicken to be eaten tomorrow night with chicken grilled on the George Foreman. Tex-Mex macaroni beef casserole to be consumed later this week. (Part of my goal in going casserole crazy was to use up the two partially used boxes of macaroni so that they didn't have to be moved to Atlanta. Operation Use Up the Macaroni was a success!) Sandwich meat, which I unfortunately had to buy without a coupon because we needed it, and cheese, which was conveniently on sale today. Empty space for the Chicken and Stuffing casserole that is currently cooling on the counter (for tonight's dinner!).
Bottom shelf, l to r: Leftover brown rice and lentils, which I didn't even like the first night, so hopefully A will eat them. Copious amounts of yogurt (store brand light for A and assorted Greek for me). Chicken thawing to be grilled tomorrow night. Buitoni cheese ravioli to use, along with zucchini and yellow squash, in the aforementioned Real Simple recipe. Half an onion. Pineapple, waiting to be sliced into bite-sized chunks.
And hiding in the bottom vegetable//fruit drawer are 5 lbs of tangerines, 6 apples, celery, a bag of baby carrots, a cucumber, a green pepper, and the zucchini and squash.
On afternoons like this, the kitchen is my happy place.