Hacking has taken on a whole new meaning in the past few years. It no longer solely means doing something shady or illegal. According to Mark Zuckerburg, Facebook founder extraordinaire, hacking just means building something quickly or testing the boundaries of what can be done. My co-worker John has a good post about why being a hacker is a good thing.

The Iron Yard has been co-hosting a monthly civic hack night with an group called Code for Atlanta. CfA is a “brigade” of a larger organization, Code for America. They approached us about this partnership and have made it super easy to mostly just provide space for this meetup. I’ve gone every month but haven’t really thought much about what it meant; it was just something I did. The goal was to provide a space for groups that had worked on a project at a hackathon to have an outlet for continuing to build that product, or so I thought.

This past week the hack night was held at a different location, but I went anyway because I thought it would be good for us to be represented. Every month I’ve held back from actually jumping in with a team because I’m not a developer and for a slew of other unknown, unexamined reasons. This month, though, a representative from Code for America was there to do a presentation on what civic hacking is, and my mind was blown. The projects that other cities have done were so cool, addressing problems from not understanding the redistricting lines in a Chicago school system to wanting more transparency about campaign spending in Oakland. Some cities have even held “writeathons” to use citizens to re-write city or other local government websites in language that actually makes sense to the average person. I may not be able to code, but I can write!!

This slide of Code for America’s key capabilities spoke to me: 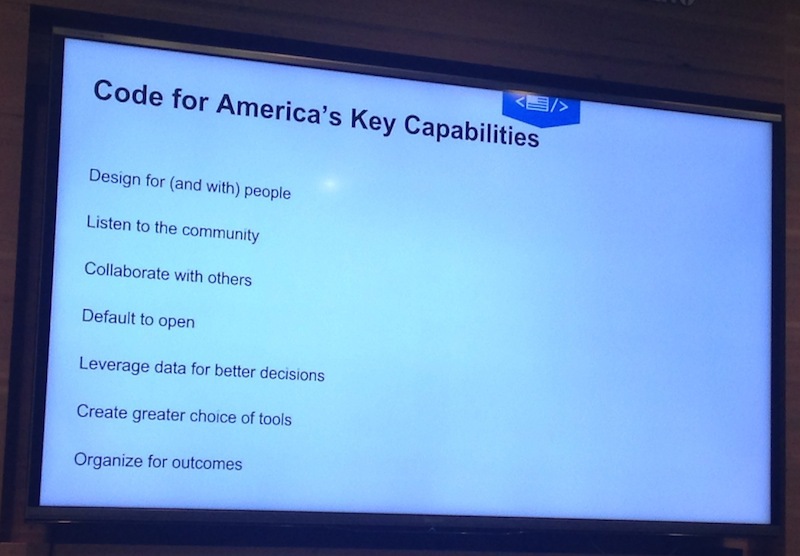 An over-arching point he made is that civic hacking is far from being only about writing code. It’s about collaborating as a community, about bringing together skills to solve problems, about changing the way we approach governance.

As it stated on another slide, “We make the road by walking.”

I was all fired up after he spoke, and next month I think I might dive in. I totally don’t feel like I have time to work on yet another project, but who really does?! If I have the opportunity to hack away at a compelling solution to a problem in my city, who am I to turn it down?