I dissected my failed Crockpot attempt at stew last night in a stubborn effort to salvage it. After all, it had a whole package of chicken breasts in it that I was loath to let go to waste!

First, I separated out all of the chicken, corn, mushrooms, and onions and set them aside. These parts were cooked enough. I rinsed off some of the chicken that had more prominent bits of boiled chicken silt, which I have previously deemed "grosslets."

Then, I spooned out the carrots and potatoes into a pot, over which I strained the remaining broth through one of these guys:

I let this boil on the stove for awhile in the newly silt-free broth, much longer than I thought would be necessary. The potatoes just did NOT want to get soft! But once the carrots were soft and the potatoes were reasonably close, I took it off the heat and called it done.

I had placed the chicken, corn, mushrooms, and onions into a casserole dish, into which I added the newly cooked carrots and a small portion of the potatoes. I mixed in some of this stuff: 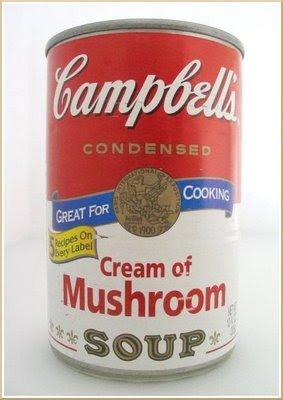 and called it a casserole. I live in the South. If it has cream of something soup in it, it's a casserole, hands down.

I covered the dish with foil and left it overnight. Tonight for dinner, I sprinkled some breadcrumbs on it, baked it for about half an hour, and....drumroll please! Miracle of miracles, it was actually pretty good! I would never follow this recipe again, and it was much too hard won to be a desirable casserole to recreate, but at least my package of chicken did not go to waste.

And we even have leftovers for dinner tomorrow, as planned. Crisis averted.