Georgia Power recently released a document about surviving a hurricane. While we’re inland enough that we likely won’t be hit by one, it is possible for us to receive spin-off storms that could potentially be severe. (In fact, we’re getting rain from Lee right now, and the entire state of Georgia is under a tornado watch.) And, you never know. Katrina was as strong as a tropical storm even far inland into Mississippi, and the city where I grew up was without power for quite some time. Plus, there are disasters other than hurricanes that can leave residences without power, as A. and I well know from the rash of tornadoes that ripped through Alabama and the rest of the Southeast on April 27. We had the distinct advantage of moving to our new apartment that weekend, but we still had a few days without power for which we were woefully unprepared. So, in light of all that, we decided to follow some of Georgia Power’s guidelines and create ourselves a disaster preparedness kit including 3-4 days’ worth of food. 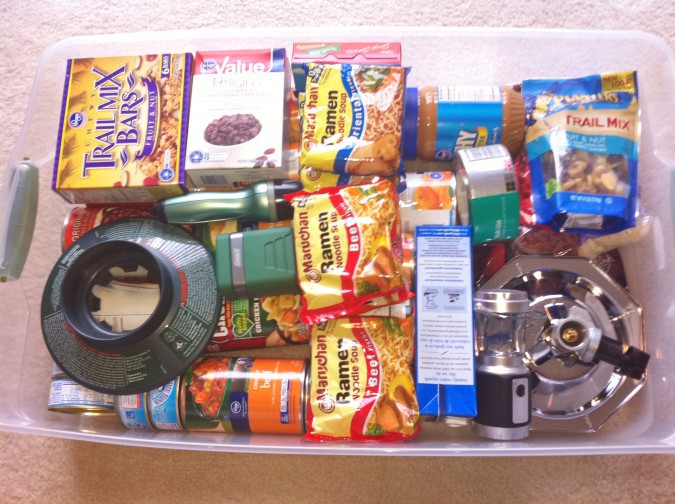 A. ordered a portable propane stove from Amazon. After the tornadoes, we went to his parents’ house and were able to have a hot cup of tea because they had a stove like this. While you can’t cook a gourmet meal on it, it makes it much more possible to eat “real food,” as opposed to the bread and peanut butter we were able to eat at home.

Knowing we had that, we stocked up on non-perishables, some of which require cooking. The kit includes:

We checked the expiration dates on everything, and I think either things have changed since the 1960s or the nuclear fallout shelter in the movie Blast From the Past that fed a man for 35 years is an impossibility. Most of our stuff expires within the year (though some is a bit longer). A. added a to-do on his calendar to check on the stuff in April or so of next year, and we can either get rid of it or add it to our circulation of “normal food.”

In addition to the food, we threw in some duct tape and most of our flashlights. Georgia Power recommended having disposable plates and utensils, but we decided not to worry about that. If it is cold and we need this kit, we have plenty of blankets and things around, and if it is hot, we have a small cooler that could hold ice and a few perishables. We also have a 5-gallon water storage bladder that is full of tap water should the need for that arise.

Our experience with the tornadoes in April also taught us the importance of having a battery operated weather radio. We had no such thing during the hours we spent huddled in our laundry room. We had the I Heart Radio app on our phones that allowed us to listen to the local radio, and thankfully we had a car battery starter that could charge our cell phones, but without that, we would have been in the aural dark. (We’ve made sure to keep that charger charged itself should a similar situation ever arise.) The weather radio we bought lives by our bed and goes off occasionally when there are weather alerts in our area.

Though it’s unlikely we’ll need most of this, it’s good peace of mind to have it all on hand in a convenient underbed storage bin. The most likely thing that could happen to us is losing power, and we’d be well-covered with this kit. I’m not sure much of anything can prepare you for sustaining drastic damage during a storm, but every little bit of thinking you do ahead of time probably can’t hurt.

Do you have a disaster kit or emergency plan? What are some tips you’ve had to learn the hard way, or things you wish you’d known before going through some type of disaster situation?