Safe & Sound: A New Home for Your Fire Extinguishers

Fire extinguishers are a must-have in any home (and I even have one in the trunk of my car!), but they don’t last forever. Last year, I somehow managed to inadvertently discharge the one under our sink, and I learned that, after any use, a fire extinguisher needs to be re-pressurized in order to work properly. It makes sense: fire extinguishers rely on pressure to shoot out the fire-supressing stuff, so without that pressure they’re pretty useless. I called around a little bit to try and figure out what to do with it (could I get it recharged somewhere?) but to little avail. Luckily, at that point we lived in an apartment complex, so we just paid to have maintenance take the old one and bring us a new one. 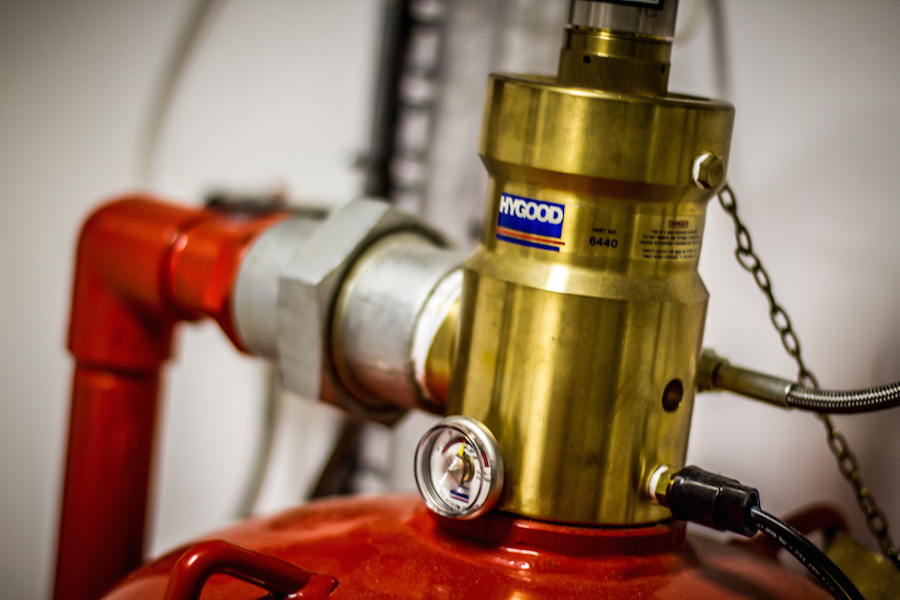 Fast forward to our new home. We’ve gotten a couple of new fire extinguishers to stash around our bigger place. Imagine our surprise when we got a notice from Amazon that the models we had ordered were part of a product recall and needed to be disposed of! The manufacturer shipped us replacements, but we were still left with the old ones to trash.

What do you do with a fire extinguisher that doesn’t work? I took to Google, of course, but there’s precious little out there with much detail. “Contact your local fire department,” a lot of sites suggested. “Follow your community’s guidelines for hazardous waste disposal,” some others cautioned.

And this gem from the county fire and rescue service was particularly helpful:

Should you have the typical multi-purpose residential extinguisher, it should be discarded after use.

Discarded after use? Great! How should I do that?

I emailed a representative at the city fire rescue department, and she responded surprisingly quickly with the name of a company that would take our useless fire extinguishers and dispose of them properly. Typically companies that handle business fire supression systems will know what to do. The only catch was that this company is located in a far suburb, and it didn’t seem worth my while to drive all the way out there for that. (Ironically enough, the next night I found myself sitting at a red light behind a service van from that VERY company! I wished I could hop out and ask the driver to take my fire extinguishers!) The only other such companies I could find were also headquartered far out of the city.

So I called my local fire station and asked if I could drop the extinguisher off there to be disposed of. Nope.

I had reached an impasse. It seemed like such a small thing: my fire extinguisher does not do its job as a fire supression tool, and I need to get rid of it. Yet there were no standard procedures in my city, or really anywhere on the Internet, for my situation.

I found a website from a city in Pennsylvania that instructed citizens to simply disharge the extinguisher (read: squirt the powder) into a trash bag, and then dump both the bag and the spent extinguisher into the regular trash. Apparently the contents are not actually hazardous, and neither is anything inherent in the metal can. It’s just the pressure that can be dangerous and requires you not to throw away a fully charged fire extinguisher. So Andy and I were readying to have a fun moment shooting off our fire extinguishers. But I still felt kind of guilty thinking about that metal canister sitting in a landfill forever, so I tried one more thing: the Keep Atlanta Beautiful Community Recycling Program.

Fire extinguishers weren’t listed under the items they accept, but I emailed someone through the website and got the response: yes, they would take my fire extinguishers, as long as the pins were in place! I clarified: did it need to be discharged? Nope! We could just bring them as they were. Woo hoo!

So last Saturday Andy and I drove over to the school parking lot near us where they hold monthly drop-offs. It’s quite the operation! They have trucks and bins stationed in an orderly manner all around the lot, and they direct you to the approrpriate one for the type of recyclable you have. We pulled up to the “metals” station and handed over the fire extinguishers. The rep there asked if they were discharged, and I said no, and he said, okay, thanks. And we drove away. I felt like I should have gotten my picture taken shaking the metal guy’s hand as I relinquished the small bane of my existence.

It was the end of a saga that seems like it should never have been a saga in the first place! We all have fire extinguishers, and it’s a known fact that after they’re used they need to be disposed of, and yet no one out there seems to have good instructions for doing so.

I’m sharing this as a PSA in hopes that it might help one of you. This took up way too much of my brain space for way too long. I sort of wished I could go back to ignorance and just plop the fire extinguisher into the trash can without a second thought. But once you know too much, there’s no looking back.

Don’t throw your fire extinguishers away fully charged. Look for a community recycling program in your area that might take it, or else discharge the contents and pressure and toss it in whatever way your city lets you toss metals. Try searching for commercial fire service companies like this one, and maybe you’ll be lucky enough to have one close than an hour’s drive away from you. It shouldn’t take you as long as it took me to do the right thing. And make sure you replace it! You’d hate to reach for a fire extinguisher in an emergency situation and not find one there, or find one that didn’t have enough pressure to get the job done.