I recently started using My Fitness Pal to track my food and exercise. I’ve tried out my share of apps and processes for doing this in the past, but I’ve never really tracked calories before. I tried to manually in college for awhile, but it was exhausting trying to determine the calorie count in everything I ate! My entries would get ridiculous if I ate, say, a sandwich, and had to write out the bread, the mayonnaise, the lettuce, etc, etc.

I’ve always done well using just pen and paper to keep a food log, sans calorie count. Something about knowing I would have to write it down kept me from grazing on the miscellaneous treats out in the kitchen at work. Even though the manual method doesn’t provide any graphs, charts, or progress reports, it was still satisfying to me, and I noticed results.

I tend to return to my food log habits when I’m feeling out of control in other areas of my life. What I put into my body is something that I can have 100% control over, and by writing it down, I get the self-reflective pleasure of looking back over it at the end of the day. I try to be really careful, though, because I can also see how my controlling tendencies could very easily morph into an unhealthy obsession.

I love food, and I also suffer from drastic hunger mood swings, so I would never skip meals or give up eating just for the rush of the calorie count at the end of the day…but I can see how that’s tempting.

All that to say, I’ve been feeling a bit out of control food-wise of late, and my pants haven’t been fitting quite how I like, so I decided to try to take charge over my food instead of letting it be in charge of me. My mom recommended My Fitness Pal, and so far I’ve really enjoyed it. It has a large database of searchable foods, and you can also import recipes from the web and let it magically calculate the nutritional info. This is great for me since I cook from Pinterest a lot! (The only thing I wish it did was give you gold stars for your water consumption…I drink a LOT of water, and it doesn’t seem to care.)

The app can also connect to other fitness trackers, so I have it counting my steps from my FitBit. You can manually enter exercise as well, and between that and your steps, you’re given calorie credit that gets added onto the calories it assigns you based on your goals.

I told it my goal right now was to maintain my weight, because the calorie allowance got way too small when I told it I wanted to lose five pounds. BUT, I try not to eat the calories I earn from exercise, and so far it’s been telling me that I’m on track to lose a couple of pounds, slowly, over five weeks.

I really appreciated the exercise allowance on Saturday, when I pigged out on pizza and went to a brew pub for a friend’s birthday. I had conveniently gone to spin class that morning and walked to said brew pub, so I had a bunch of extra calories and still managed to come out ahead for the day.

But when I’m not exercising like crazy, I appreciate that the app includes a number of restaurant foods in its database. In fact, someone had even entered a few beers from the local brew pub we went to! Sometimes I just wing it, though. Tonight I made up a sauteed cabbage and mushroom dish with some leftover sauce from baked tofu I had made, and I just picked something called “Mushroom Spinach Sautee” from the database and called it even.

Last week I had a team lunch with the other writers for a local startup news site I just joined. It was only my third day of tracking calories, and I wanted to eat really healthily. We were heading to Jason’s Deli, so I checked out their website ahead of time to try and make a reasonable choice. I found that they had a handy nutrional calculator! 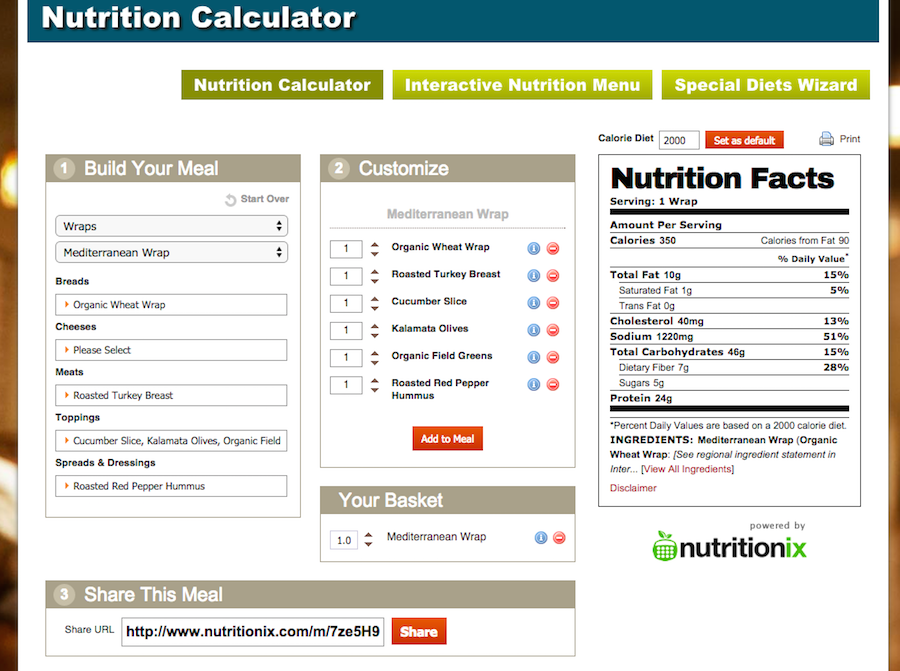 I had NO IDEA how many calories I ate in a day before I started using this app, and I’ve been somewhat appalled at the calorie count of some of my favorite, seemingly innocuous foods. Like, the turkey club I may have gotten otherwise at Jason’s was worth about half of my daily calories. Yikes! But I selected a Mediterranean Wrap that still sounded pretty delicious.

By selecting my food ahead of time, I avoided hemming and hawing in line at the restaurant and risking being swayed into picking something less healthy. For me, anticipation is often half the fun, so I got to think about how yummy that wrap was going to be for a few hours. And, I still ate the baked potato chips and had a small cup of the free soft serve, because I knew the main part of my meal was not calorie-dense.

Even if the place you’re going doesn’t have a nutritional calculator, you can still look at the menu and use your common sense to determine what might be a good choice. Anything with “fried” in the name is probably not the best, and even salads can pack a wollop in the dressing. It’s worthwhile to take those few minutes ahead of time to serve you better nutritionally in the long run.

I doubt I’ll count my calories forever, but it’s been eye-opening doing it for the past few weeks. I’m sure I’ll have free-for-all days in the future, but I’m not sure I’ll ever be able to do them guiltlessly knowing what I know now. That makes me a little sad in some ways, but I also know I’m better off for being aware. I’ll savor the things I do eat even more!