How I Fold a Fitted Sheet

This is a total shift in gears from yesterday's post. I'm loving the discussion going on there, so feel free to keep commenting. In the meantime...

I love folding laundry.  My mom used to refuse to fold my t-shirts because she knew if they weren't lined up perfectly I would just unfold the entire basket and refold it "my way." Somehow over the years, I developed a knack for folding fitted sheets, which I'm finding seems to be a bit of an anomaly in this world. Even my college roommate, who is one of the most fastidious people I know, despairs of folding the fitted sheet. Now, I will grant that it is more difficult to perform this act with a queen sheet than a twin, but I've been giving it a go and steadily improving. Here are my steps, for your folding pleasure.

(I think credit probably has to go to my mom for this, and to Real Simple for the packet idea. All images mine.) 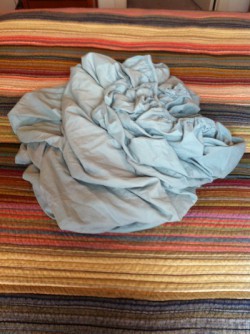 Your sheet will come out of the dryer looking something like this. Shake it out and lay it as flat as it will go. It helps to have a large work surface on which to do this. I like using the bed. 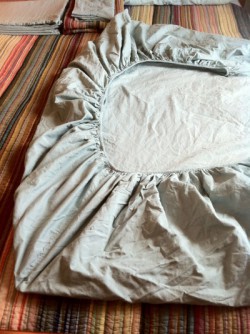 Stick your pointer finger in the very deepest recesses of one of the pockets. It doesn't matter which corner you start with. With your finger buried tightly, match that corner up to the corresponding one. There's a pretty apparent seam at the point that resides at the very corner of your mattress, and this is the spot where you want to put your finger. Do the same on the other edge of the sheet and lay it flat in as much of a square as you can make it. The edge opposite the matched up pockets will be more of a curve than a straight line, but you have tight 90 degree angles at the top, and that's all you need. 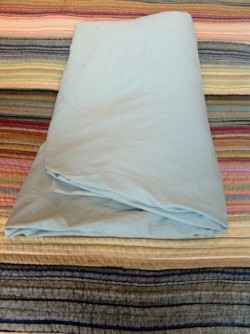 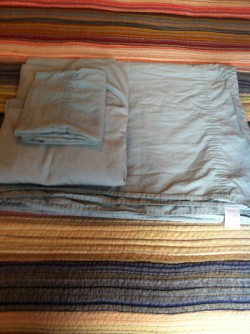 Grab your flat sheet, which you have previously folded into a beautiful rectangle, and place the now-folded fitted sheet on top of it, with the pillowcases (folded into smaller rectangles) on top of it. 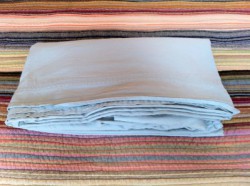 Fold the flat sheet over the fitted sheet and pillowcases, producing this neat little packet o' sheets. Admire your handiwork and feel like the most organized person in the world until you go try to insert the packet into your linen closet, whose shelves are too short to hold it and whose stacks of towels border on the chaotic. Shove the sheet packet in willy-nilly and forget about the chaos long enough to write a blog post.

....nahhhh. That would be taking things way too far.