In Pursuit of Pumpkin: Pumpkin Pie

When fall comes around, I go pumpkin crazy. I’ve always loved the pumpkin pie at Thanksgiving, but I’m not sure I ever thought about enjoying pumpkin outside of that one day a year until Starbucks pumpkin spice lattes came into my life. Now, I’m one of those people who gets excited when it’s featured on their menu again every year (though one of my coworkers reminded me that you can get whatever flavor drink you want at Starbucks all year round). Even though we don’t usually get much of a fall in the South, once the calendar hits September, I have pumpkin on the brain. When I realized I had a preposterous number of pumpkin recipes pinned, I decided to share them here. Here’s the final installment of 10 pumpkin recipes for your gustatory pleasure!

Well folks, after 10 weeks, we’ve made it to the crowning glory of the pumpkin recipes: pumpkin pie. I’ve usually used frozen pie crust (or, uh, my mom has made the crust) and followed the recipe on the side of the pumpkin can, so I decided to go wild and crazy for the sake of the blog this year and make the crust from scratch AND try out a different recipe. I turned again to my trusty Fannie Farmer and found that the filling didn’t deviate much from my usual recipe: pureed pumpkin (she probably assumes you’ve made your own), evaporated milk, sugar, cinnamon, nutmeg, cloves, a dash of salt. She does add half a cup of regular milk, which I’ve not seen before. That part’s easy: dump all the deliciousness in a bowl and whisk. Done. But the crust. Ah, the crust. I compared recipes from Fannie and Baking at Home but also remembered a post from the Pioneer Woman about her approach to pie crust. I looked it up and saw that she called it “The Perfect Pie Crust.” Well, how can I argue with that? It sounded simpler than either of the other two, plus it had what seemed to be a secret ingredient (vinegar?!), so I decided to go with it. I trust the Pioneer Woman. Plus she has a lot of pictures, which I thought might be helpful with something requiring as much finesse as a pie crust.

The Pioneer Woman swears by Crisco for a pie crust, so even though Fannie told me I could use butter, I decided to give it a shot.

Oh, Crisco. What are you? I am slightly terrified of you.

I bought a pastry blender just for this project. Isn’t it fun having excuses to buy new kitchen gadgets? 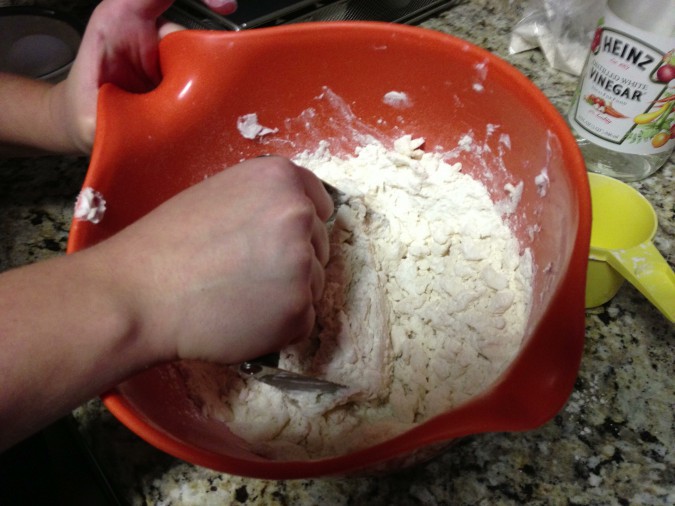 The instructions say to blend the Crisco into the flour until the mixture resembles a coarse meal. I was having so much fun with the pastry blender that I think I went a little bit too far, and it was already more like dough. 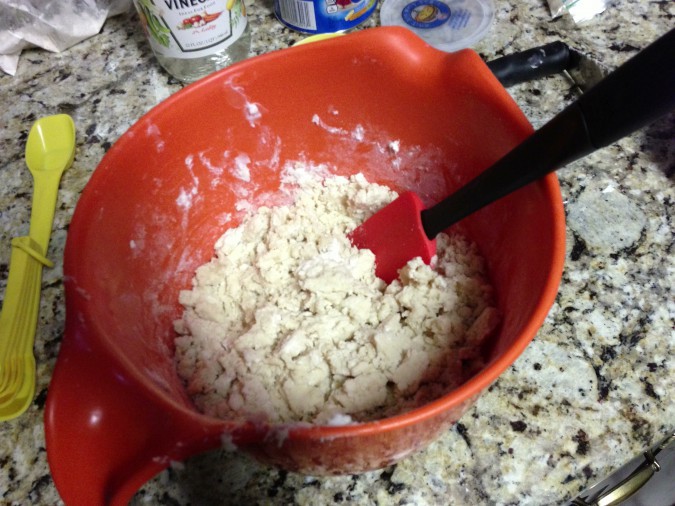 Add in the wet ingredients and stir gently. As with scones, you don’t want to work with it too much or it may get tough!

Shape the dough into 3 balls and place them each in a bag. Roll out the lumps a bit to make rolling easier later. Then let them chill in the freezer for 20 minutes or until you need them. 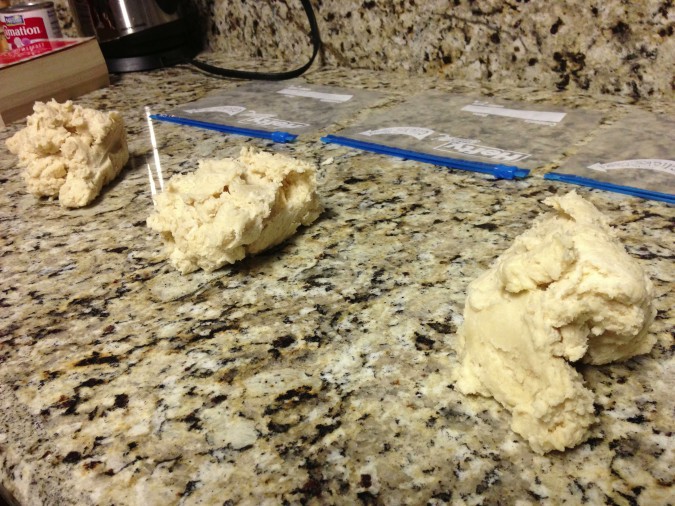 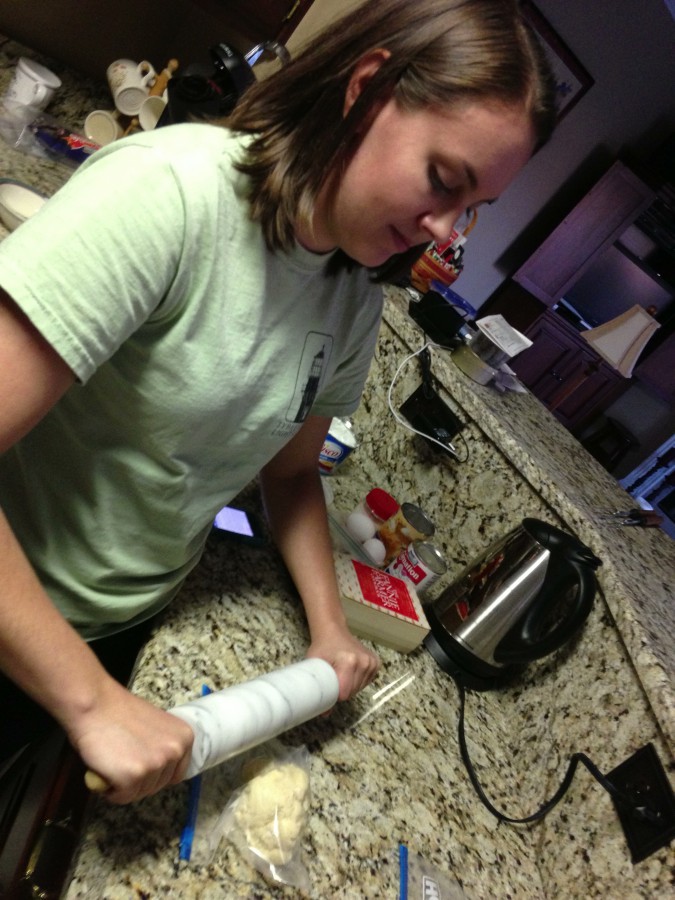 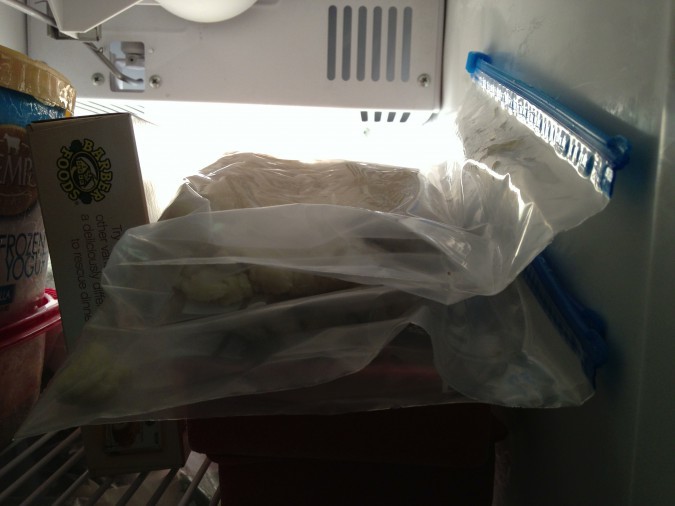 I was so impatient and anxious about rolling out the dough, but I forced myself to wait the full 20 minutes. Honestly, the dough wasn’t even really that cold after all that time! And then I worked with it so much that it was back to being pretty warm by the time I got it in something resembling, like, a circle.

There aren’t any pictures of the rolling and the placing into the pan, but let’s just say it was far from expert. I ended up balling the dough up and starting over several times. I think I needed more flour from the beginning. I eventually got it roughly big enough–I didn’t have much to flute at the edges, but I made it work.

While the dough was chilling, I mixed up the simple filling. 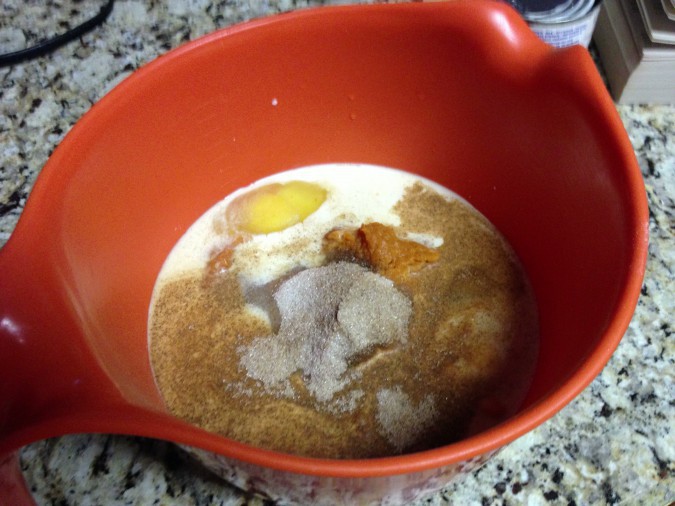 The filling didn’t quite all fit–maybe Fannie’s pie plate was a little deeper than mine, but it was lookin’ like a pie by the time I poured it in! 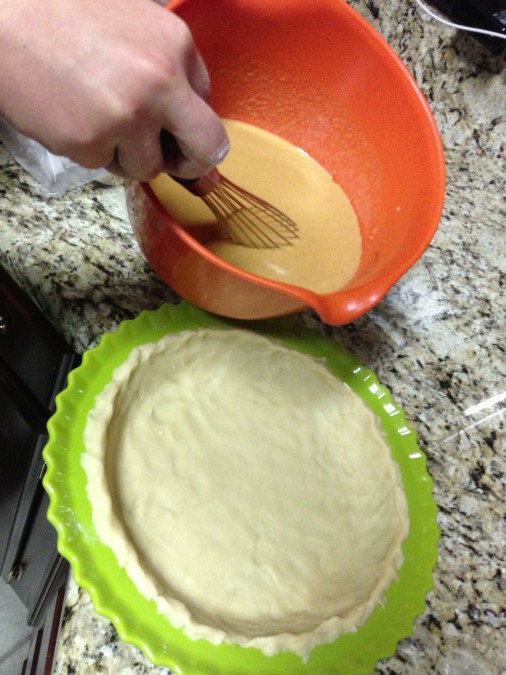 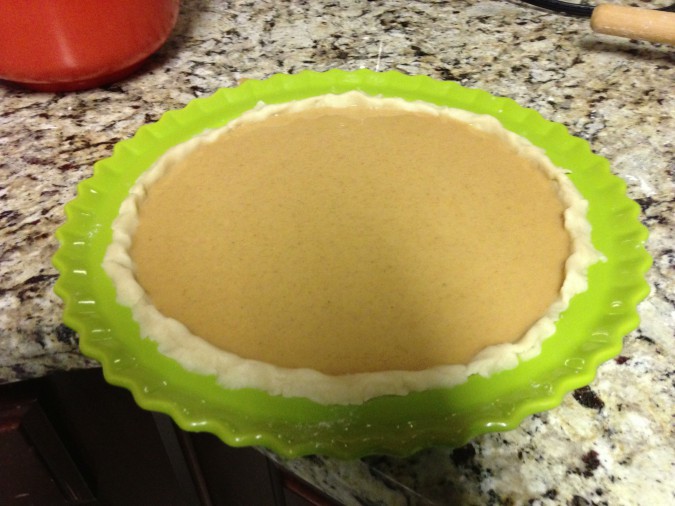 And, like the magic, on a cooking show, here’s the completed pie!

Success! The crown jewel of the Thanksgiving table, especially with a dollop of “real” whipped cream on top. Mmm, mmm, mmm good.

While the pie crust was not a breeze, it was not as scary as I had feared, and I won’t hesitate to do it again! Plus, now that I have a pretty green pie plate, I’m probably going to want to make pies all the time. Should that be my next blog series? ;-)