I am often frustrated by craft projects, because they never seem to come out as streamlined and sleek as they are in my head. BUT, I think sewing has given me some renewed vigor to give crafts a chance. I’ve also been inspired a lot by things I find on Pinterest, which is where I found this most recent project! I “repinned” a picture from someone of these adorable people cutouts covered with maps. It was actually a listing on a site called Folksy; you can order the people (with customized maps) for $30 plus shipping and handling. But I thought…I could do that! And this past weekend, that’s exactly what I did.

Here’s what I started with: 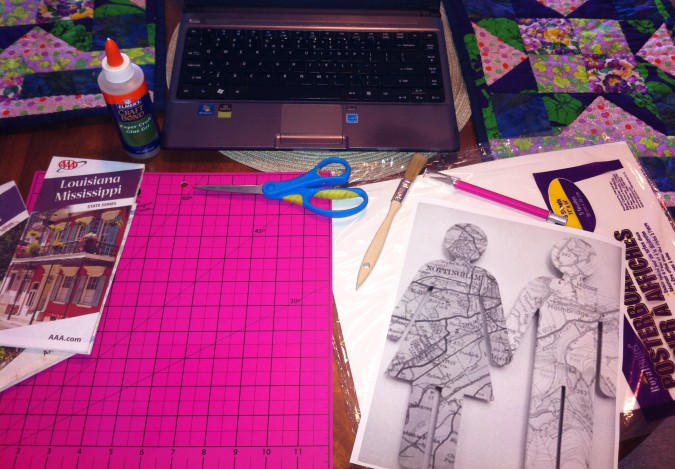 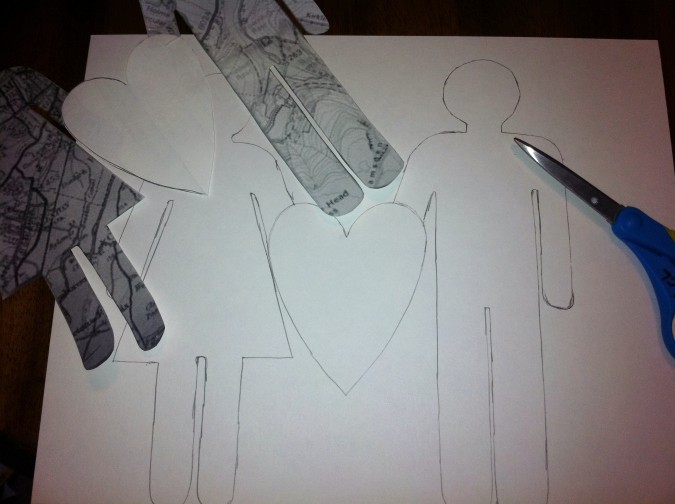 First I traced the cutout onto my posterboard. I wanted to incorporate a heart in there somewhere, so I put it in between the people’s held hands. I cut the heart out of a scrap piece of paper I pulled out of the recycling bin. 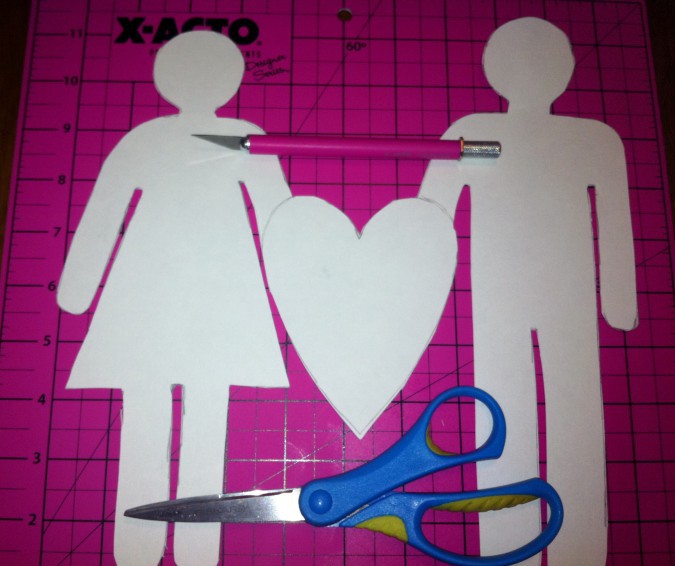 Then I cut the people out. It was really tough using the Exacto blade around the curves, so I ended up using the scissors some, too. I wasn’t worried about the faint pencil lines left showing because I knew I’d be covering the whole thing with map. 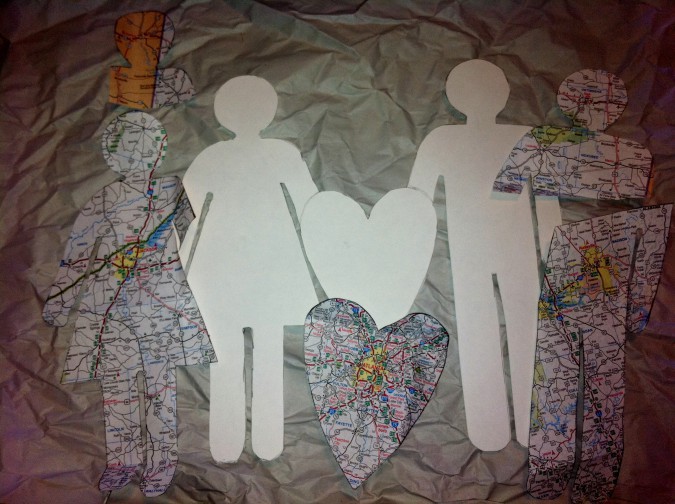 Next I cut out the bits of map I wanted to use for each part. I centered Jackson, Mississippi (where I was born and grew up) near my heart and cut out the girl shape. I put Columbus, Mississippi on my head/brain to show where I went to high school. Unfortunately Birmingham, Alabama, where I went to college, was smack on the back of Atlanta, but I managed to salvage a small piece of it for my foot. Atlanta (where we live now) and its environs cover the heart, and A. (the boy shape, obviously) is covered with Starkville, Mississippi (where he went to college) on his head/brain and Huntsville, Alabama (where he grew up and where we first lived together) on the rest of his body. This part was pretty tedious, and I was terrified that things wouldn’t line up well or wouldn’t cover all the posterboard, but with some concentration it all worked out! 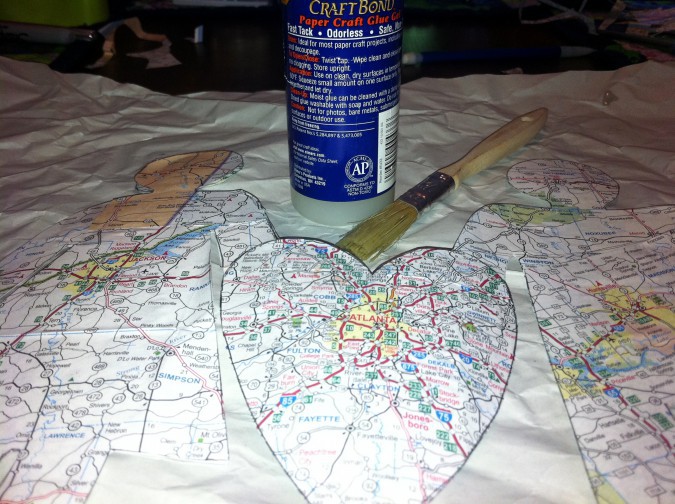 Finally, I squirted some glue gel on each part in turn and spread it into a thin layer with the paintbrush. I did the heart last so that any rogue pieces from either person would simply be covered by it. 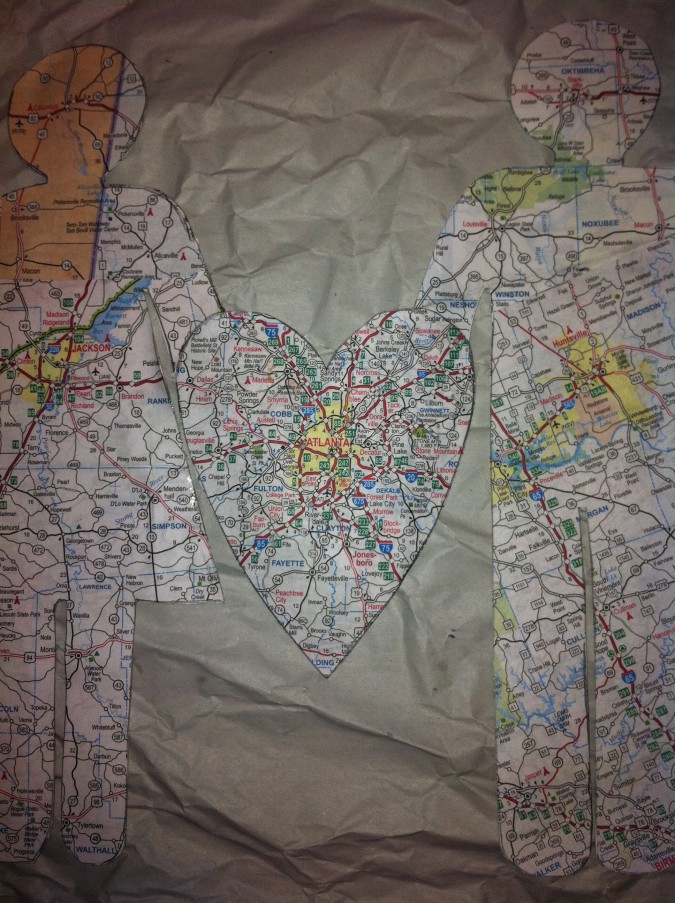 I might think about covering it with some type of shellac or glaze to make it shiny, and I also need to put a heavy book or something on top of it to keep the edges from curling up as it dries. I didn’t buy a frame ahead of time because I wasn’t sure how large it would turn out in the end, but I think an 11x14 will work out well. Whew! I was worried it would need some really non-standard size frame!

I bought some glue dots to attach it to whatever I used as the background in the frame to give them the 3-dimensional feel of the Folksy inspiration, so I guess I need to get a shadowbox. We’ll see how that goes! But I’m very pleased with the results. Perhaps my crafter’s block has been conquered once and for all.