Tomorrow, the new president of my college is coming to Atlanta to speak. I will go eat lunch at a ritzy country club and get an update on my good ole alma mater. My school went through some crazy financial mess last summer as it was revealed that an inconsistency in the distribution of financial aid had severely impacted the endowment. It was one of those things that had seemingly been going on for awhile but hadn’t come to the light of day yet. And in the meantime, the then-president had been doing all kinds of major reno projects on campus which, while nice, weren’t the most necessary. Long story short, he resigned, a huge overhaul of the budget was done, and a grand push was made for alumin giving. A new president was hired to whip the college back into shape, and he’s been doing a great job at communicating with alums (a task which fell by the wayside during much of the hoopla-I got most of my updates last summer from Facebook and The Birmingham News). The college was placed under a warning from the SACS accreditation committee last week based on its 2010 financials, but that was to be expected, and a warning is the least of the sanctions. The warning doesn’t reflect the strides they’ve made since then, and the president is confident the school will come out from under it by next year.

All this has made me think a lot about my college experience. I applied to a grand total of 9 schools and was accepted into 8 of those. Many of them were similar, especially as far as academics went, but I had a clear winner in the realm of the overall feel I got on campus. I was excited to jump in.

My freshman year, I’ll admit, was rough. I had gone to a two-year residential high school, which had many similarities to a college experience, and built incredibly strong friendships. I was prone to comparing everything about my freshman year to my time in high school, and college always seemed to fall short. In fact, midway through the year I considered transferring to the large state school that many of my high school friends attended. My parents, in their wisdom that I had no desire to hear at the time, convinced me to wait it out another semester, and by the end of that semester, I was settled and much happier.

I fell into a fabulous group of girl friends by the end of that year. We lived on the Honors hall of a freshman girls’ dorm, and our domain was the basement. We had a short hall with no common room like the other floors, so we often pow-wowed on the floor in the hall, sharing pints of Ben and Jerry’s Chunky Monkey, doing handstands against the walls, and meriting odd glances as other girls came down to do their laundry. (I can’t imagine why.) 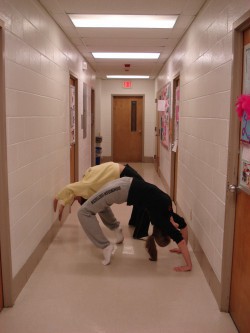 We moved into upperclassmen housing together, dividing ourselves into suites. My suite ended up with an empty room, so we had two years’ worth of miscellaneous fourth roommates who didn’t quite enter the fold. By my senior year, I had decided to graduate a semester early, and my two closest roommate friends moved into an on-campus apartment together. I spent my last semester in a suite with people I didn’t know that well. It was fine, but it felt weird starting from scratch in the roommate game after 3 years at school.

I had friend angst throughout college. I had that close-knit group of friends from high school, and A. and I were dating long distance for most of this time, so I felt pulled away from campus in several directions. I got very involved in church and had a group of friends there as well who were unrelated to my school. My freshman-year group of friends were a constant, but they each also had their own satellite circles of friends. I never seemed to learn how to take a friendship from a “we chit-chat in class” friendship to a “let’s hang out on the weekend” friendship. I left campus more weekends than I stayed, and during the week I seemed to spend most of my time doing homework. I dove headfirst into several clubs and organizations and committed a lot of time to them, but I never felt exactly like I had found my niche.

Greek life and partying were also much bigger on campus than I had been led to believe. I skipped out on the initial recruitment bid process and a subsequent opportunity to join a sorority through an open bid. I’m glad I did, but throughout college I often questioned that decision. I gave campus tours for a few years and I knew the official line to toe when it came to answering questions about partying and Greek life, but it got harder and harder to spit out the “right answer” the more disillusioned with it I became. By my last semester, I was so over it all. I was over the parties that I had never even gone to, I was over the unspoken power that the Greek bloc had, and I was over not feeling like I had a place on campus. In fact, that last semester I was so mentally gone that I feel like I missed out on some things that I actually could have really enjoyed. But I was distracted by writing a senior paper, planning a wedding, and trying to keep a long-distance relationship thriving.

I sound like I had a miserable 3 1/2 years in college, but that’s definitely far from the case. There were a lot of things I loved about my school, and I had some great classes and teachers. I did some things in college I never thought I would do and had some experiences I will likely never have again. And I came out of it all with a great group of friends, many of whom stood by me on my wedding day. We’re all scattered right now, and I think we’re still trying to figure out how this whole adult friendship thing will work, but I’m confident we will. I just, in retrospect, wish I had immersed myself more fully in the college experience. I had a nagging feeling the whole time that I was missing something, that I wasn’t having the college experience other people had, but I think if I had just let go of that and lived my own experience, I would have been more satisfied.

Given all of this, when the financial mess became clear last summer, a part of me was ready just to be angry at my school and to practically disown it. I was disappointed in the institution and the leadership. But as the scene played out, I grew angry over other things. I was angry at the drastic cuts and changes they had to make to the academic program, which was truly the heart of college life for many at my school. I was angry for all the students who were left there during the mess, and I was angry over the people who questioned the value of a degree from my school. But I felt a burgeoning sense of pride as the solutions were found and as the press releases were drafted and as the students coalesced. And I decided that I want to be a better alum than I was a student. I want to be excited for my school, to go back and visit and to follow it in the news and support it for the future. I want to be able to recommend it to potential students. As I get farther from my time there, maybe the disillusionment will fade. I don’t want to be dishonest with myself, but I want to put a rose-colored tint on my time in college and be content with how it happened and let the strains of the Alma Mater bring tears to my eyes. Proudly stands my alma mater, indeed.