I haven’t done a Tasty Tuesday post in awhile! This one stems from my Birthday Resolution to “experiment with  baking bread.”

Last week, I attempted to make sourdough bread, because one time at the farmer’s market A. exclaimed that sourdough was “his very favorite.” I figured it would be a fun project for his birthday.

I used a recipe from the book Baking at Home, which I got as a wedding gift. My mom is a bread-baking pro, so she gave me some additional hints.

Sourdough gets its sour flavor from a starter, which is made ahead of time and, in the best case, is kept alive for ages and ages to let the flavor develop even more. Our starter began with half of a grated organic potato. According to the instructions, “organically raised potatoes have a number of yeast cells already present on the surface to help get the sourdough starter growing.” We “fed” the starter with additional flour and water the recommended 3 times (once after 24 hours, and 3 more times every 12 hours).

The starter did some crazy things! 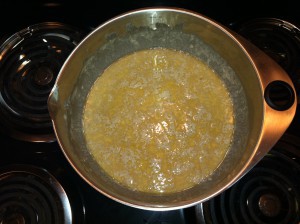 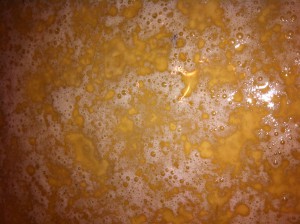 It was really science in action inside that bowl. Not only could I see the bubbles forming and notice the potatoes dissolving away, I could feel warmth when I lifted the lid off of the bowl.

Once the starter was ready, I used 1 cup of it, along with other ingredients, to mix up the bread and threw the rest away. Ideally, I should have saved the starter, but I didn’t really know what to do with it. I thought I would have to keep feeding it every 12 hours, and it was in our biggest stainless steel bowl, taking up a lot of space. But I’ve since learned that you can keep it in a jar in the refrigerator and feed it a lot less frequently. So, next time I will definitely do that, since our final product wasn’t very sour.

I left the bread to rise with a damp cloth covering the bowl. I’m not sure it was warm enough, and I probably should have left it longer, because I don’t think it quite doubled in size in the suggested time. 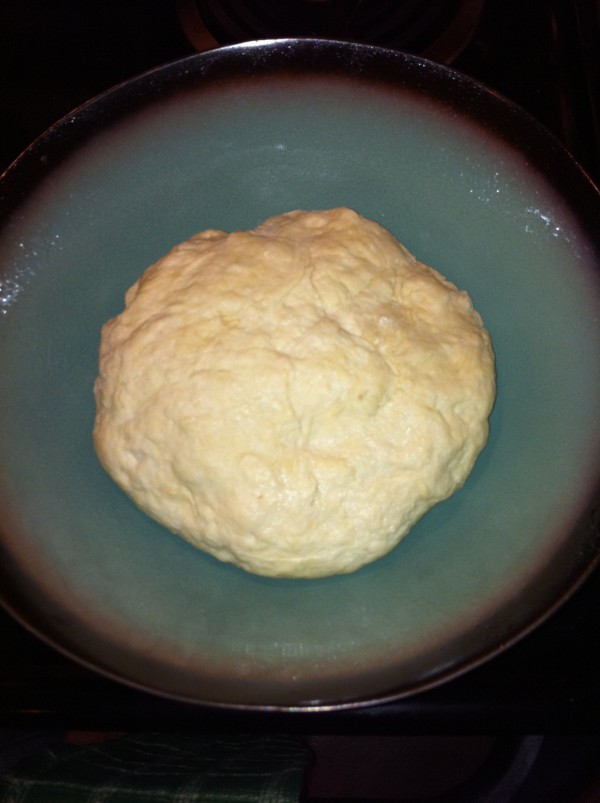 I forged ahead anyway, and shaped it into two balls to rise a little bit more. I left these on top of the stove as the oven preheated, hoping they would glean some heat from it and rise better! 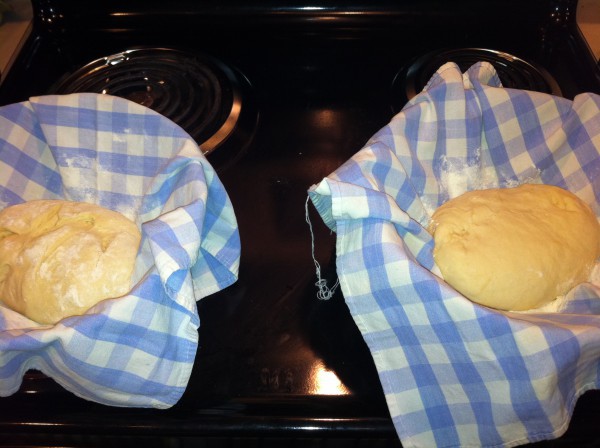 I baked the rounds on my Pampered Chef pizza stone, which I had let heat up as the oven heated (a very important step when using stone). The rounds came out a little bit deformed; one especially cracked a bit while baking. Also, they had way too much flour on top! My recipe told me to put them in “well-floured bowls” to rise the second time, but I think I took that step a little bit too far. 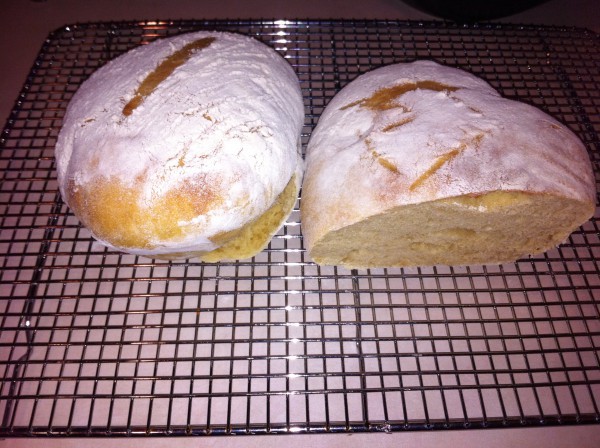 It was definitely pretty dense and, as I said, not very sour, but it was still pretty neat to eat bread and know I had made it with my own two hands. I sliced it up and put it in the freezer (I think while it was still too warm, because the slices iced together pretty well in the freezer, oops), and A. has been eating sandwiches on it for his lunches! So while it wasn’t a rip-roaring success, it was definitely a good first try at something I have been wanting to learn how to do, and I think I picked up some good lessons to put into practice next time. When I go home later this week, my mom is going to teach me to make one of her kinds of wheat bread, so maybe I’ll have another loaf in my repertoire!

What’s your favorite kind of bread? Have you ever tried to bake it yourself?

(P.S. On a totally unrelated but tasty note, I am currently addicted to Blue Diamond Honey Roasted Almonds, which probably are not really all that good for me. But they are oh so delicious.)