Okay, I guess that’s not really a thing. But forget Mr. Darcy. I just re-read all The Little House books, and seeing them through adult eyes has me enamored of Almanzo Wilder, husband of our esteemed author Laura Ingalls Wilder. Why? Read on. 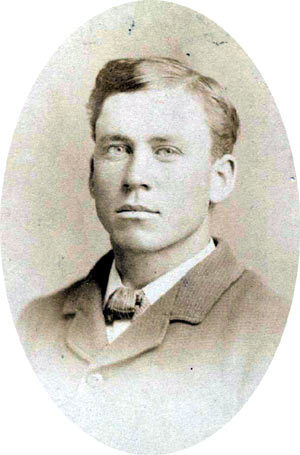 1. He makes a mean pancake.
In Farmer Boy, we’re enticed throughout the book by Almanzo’s mother’s cooking. He’s forever pulling donuts out of his pocket to munch on, and the description of his school lunch that she packed made my mouth water. But when he and his brother Royal move off to a homestead, we learn that Almanzo has taken on the cooking for the two bachelor brothers, and pancakes are his specialty.

Well okay, Almanzo, just butter me up and call me a buckwheat pancake!

2. He respects Laura.
In These Happy Golden Years, Almanzo takes it upon himself to drive Laura to and from her post at a distant homestead school. She worries constantly that he’s going to think he’s her beau now, and on one ride she impulsively tells him that she won’t go on sleigh rides with him anymore after her post is completed; she only appreciate them for the fact that they got her home, while he appreciated them for her company.

I am going with you only because I want to get home. When I am home to stay, I will not go with you any more. So now you know, and if you want to save yourself these long, cold drives, you can. […] After a startled moment, Almanzo said slowly, “I see.”

He’s surely devastated, but after dropping her off for the final time, Almanzo says goodbye.

Not until she had thanked him nicely and said good night and was in the sitting room taking off her wraps did she remember that he had not said, “Good night.” He had not said, “I’ll see you Sunday afternoon,” as he had always said before. He had said, “Good-by.” Of course, she thought. It was good-by. This had been the last sleigh ride.

(Though also of course, we realize it wasn’t.)

3. Similarly, he lets Laura be her strong and strong-willed self.
On one of those sleigh rides, Laura lets her love of his fast, sleek horses (which she’s been nursing since the first day she laid eyes on them) bubble up.

Laura drew a deep breath and exclaimed, “How beautiful!”

“What is beautiful?” Almanzo asked.

“The horses. Look at them!” Laura answered. At that moment, Prince and Lady touched noses as though they whispered to each, then together they tried to break into a run. When Almanzo had gently but firmly pulled them into a trot again, he asked, “How would you like to drive them?”

“Oh!” Laura cried. But she had to add, honestly, “Pa won’t let me drive his horses. He says I am too little and would get hurt.”

Yet Almanzo risks it and carefully teaches her to drive. Later in the book, he even entrusts her with helping him break a new set of horses because he knows she won’t be afraid!

And, in what was surely a provocative move for the era, they chose together not to use “obey” in their wedding vows.

Laura was silent again. Then she summoned all her couraged and said, “Almanzo, I must ask you something. Do you want me to promise to obey you?” Soberly he answered, “Of course not. I know it is in the wedding ceremony, but it is only something that women say. I never knew one that did it, nor any decent man that wanted her to.”

“[…] I cannot make a promise that I will not keep, and, Almanzo, even if I tried, I do not think I could obey anybody against my better judgment.”

You, sir, are a decent man.

4. He cares deeply for others.
In The Long Winter, the entire town is close to starving after the trains have been snowed in all winter and supplies haven’t come. Almanzo risks his life to go after a wild claim that a homesteader has some wheat. He saw a way to keep families like Laura’s from starving and took the chance, even though he and his brother had plenty to keep them until spring.

5. He thinks of everything.
Almanzo had some seed wheat that he built into a special hidden wall in his and Royal’s store. He was worried about being able to get seed in time to sow the fields, and, good farmer boy that he was, he couldn’t fathom that.

When he built his and Laura’s first house, he decked out the pantry with an elaborate set of drawers.

One whole long wall was shelved from the ceiling halfway down. The upper shelves were empty, but on the lowest was a glass lamp. […] Beneath this drawer were many drawers of different sizes. Directly below the spices, and above the window shelf, were two rather narrow drawers. laura found that one was almost full of white sugar, the other of brown sugar. How handy!

There’s almost an entire additional page of description of the pantry, but I won’t re-type it all here. Suffice it to say, Almanzo could come build me a pantry any darn time he likes.

6. He respects Laura’s relationship with her family.
On one of their many delightful Sunday afternoon rides, Almanzo asks Laura for a song and says something to the tune of, “You’re just like your Pa, you have always have the right song for the moment,” which must have warmed Laura’s Daddy’s girl heart.

When they’re first married, Almanzo listens to Ma’s advice about having Laura’s things set out in their new home when she first arrived to help it feel more familiar, which Laura notices and appreciates. And throughout The First Four Years, Almanzo sends for Ma when he senses Laura needs her, and they make sometimes treacherous visits to the home folks even when Rose is just a baby.

7. He knows about leaving and cleaving.
When Almanzo realized that his mother and sister were concocting a plan for a big church wedding, he suggested to Laura that they get married quickly. He neither wanted to cave to their whims nor to incur the expense of a big wedding for himself or for Laura’s Pa. Sensible and independent-minded.

Though Almanzo pursued Laura for quite some time (two novel’s worth of time!), and her family enjoys and respects him, Ma is understandably concerned when Laura comes home from a drive sporting a shiny new engagement ring.

“If only you are sure, Laura,” Ma said gently. “Sometimes I think it is the horses you care for, more than their master.”

“I couldn’t have one without the other,” Laura answered shakily.

Then Ma smiled at her, Pa cleared his throat gruffly, and Laura knew they understood what she was too shy to say.

THAT SHE LOVED HIM! is what she was too shy to say. I will take Almanzo’s quiet strength and steady pursuit of Laura over Mr. Darcy’s ardent love and admiration any day.