"The Pleasures of Cooking for One"

This title is already taken by a book by Judith Jones, renowned editor of Julia Child and James Beard, but since it’s so perfectly and delightfully phrased (and since I’m talking about her book), I decided to adopt it for my own post.

A. is out of town this week. I know for many people, their spouse being out of town elicits the question, “To cook or not to cook?” Personally, I’ve always done it, because I enjoy both cooking and eating, but it’s definitely not as much fun eating alone. I watch a lot more crappy TV when I eat alone, which is okay and enjoyable every once in awhile. But Judith Jones, who obviously loves food, was brought up short by her husband’s death when she realized she had to face this question every night. She fittingly decided….to cook!

I love some of the language she uses in the introduction to her cookbook. She writes, “This book is for those of you who want to roll up your sleeves and enjoy, from day to day, one of the great satisfactions of life. I do, however, hear the naysayers protesting. Yes, I like to cook, they say, but I like to cook for others, to give my friends pleasure. Why would I want to go to all that trouble just for me? My answer is: if you like good food, why not honor yourself enough to make a pleasing meal and relish every mouthful?”

Amen, I said, and proceeded to flip through the rest of the book. Jones includes a lot of great basic advice for any cook, not just one cooking alone, such as utensils you’ll need, spices you should have, and essentials for your pantry, fridge, and freezer. Each recipe in the book is, obviously, designed to be roughly a single portion, but each also includes instructions or suggestions for how to use elements of it again, what she calls variations and second round. For example, about the baked bass with fingerlings and zucchini Jones says, “You’re bound to have some leftover fish, so make some Fish Cakes,” and then lists the recipe for Fish Cakes on a subsequent page.

Some of the recipes in The Pleasures of Cooking for One are too fancy/weird for my taste. This is, after all, the woman who cooked alongside Julia Child and undoubtedly influenced and was influenced by the same. I would never cook Veal Kidneys in Mustard Sauce or Calf’s Liver with Shallot and Wine Pan Sauce and honestly hope never to encounter either of them on anyone else’s table. But most of the recipes and, importantly, ingredients seem pretty accessible. She has several varieties of chicken salad, for example, using the meat from a whole chicken that you broiled for a different meal. I’m perusing the book to use while I am cooking for one this week, but I think most of the recipes would also be good inspiration for a meal for 2 or 20! It’s been a fun read. 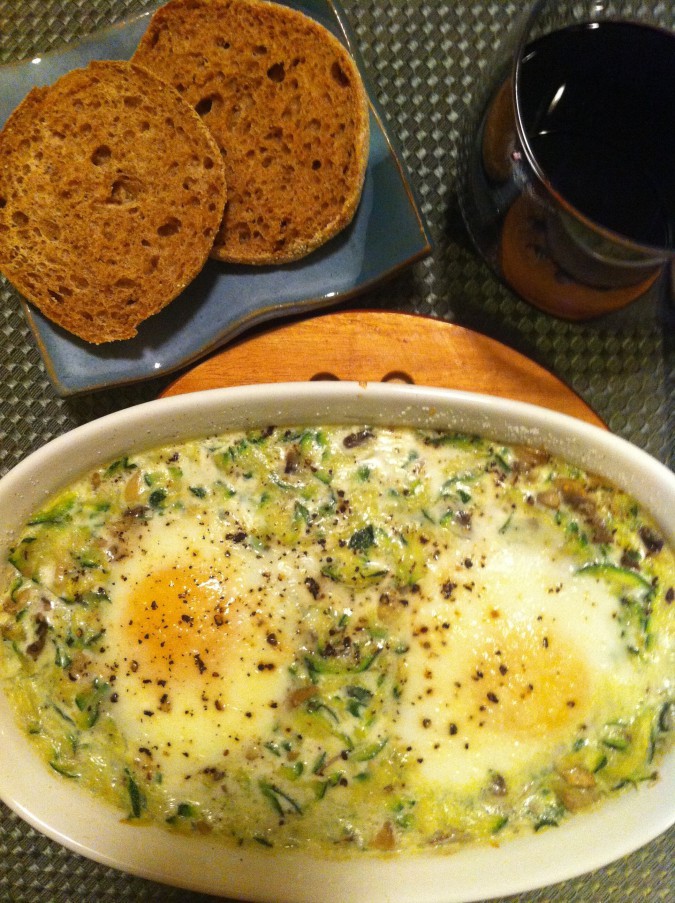 Put the zucchini in a strainer, work 1/2 tsp of salt into it, then set it over a bowl to drain. Melt the butter in a small skillet and saute the chopped mushrooms and scallion for a minute. Squeeze the zucchini to eliminate as much juice as you can, then stir the grated strands into the pan. Pour in half the cream and let cook gently for 3-4 minutes, until almost tender. Transfer the vegetables to a gratin dish and with the back of a spoon make an indentation in the middle, then crack the egg into it. Season with a little more salt and some freshly ground pepper, and drizzle the rest of the cream on top. If you wish, sprinkle on some Parmesan. Bake in a preheated 350 degree oven for 15-18 minutes, until the egg is set.

*I can take no credit for this recipe except for trying my own hand at it. All credit to Judith Jones and her book The Pleasures of Cooking for One.
This is something I wouldn't necessarily make with A. around, so I was excited to give it a shot! They were delicious. The consistency of the yolk was unlike any egg I've ever had: not runny, just super creamy and thick, without being chalky or hard. I scooped piles of the zucchini mixture and egg onto a toasted English muffin....mmmm! I think you should give Judith Jones' book a shot. If you like to cook, it will validate the feelings you get in the kitchen and inspire you to create them more often, even if only for your own benefit.
Now if only I could discover the pleasures of washing dishes for one...but I don't see that happening any time soon.