Well, after blathering on about it for almost 1000 words, I started a Whole 30 after all! Except that, in a “works for me” twist, we’re only doing it for 21 days. We’re going backpacking at the end of the month, and, as some people experience, uh, you know, intestinal difficulties after reintroducing non-whole foods back into their diet, we decided to give ourselves a couple of days before we hit the woods with freeze dried meals that include who knows what, just in case. We’re one week in, with exactly two to go. The authors of It Starts with Food, who came up with the Whole 30 program, say, for various reasons that “in [their] experience, the full thirty days of the program is essential to give you a taste of ‘the magic.’ Many Whole 30 participants report that their most significant transformations take place in the final few days of the program.” But since I don’t have a full 30 days to offer it right now, and they were also adamant about starting immediately, I figured it was better than nothing. We can always return to the program after our trip for a week or two (though “they” also say that any slip-up requires an entire reset of your 30 days….I call baloney on that, personally).

[Note: I like that they call it a program. I’m not thinking about it as a diet, and I don’t think the Hartwigs intend for you to. In fact, it’s sort of the antithesis of a diet.  I don’t really want or need to be on a diet, especially since I think the way Americans especially approach diets is, for the most part, unhealthy. But diet is the word most people can associate easily with a change in eating habits, so I’ve tried to come up with a good response when people ask me what diet I’m doing. I’ve been saying that it’s less about restricting what you eat and more about trying to change your approach to food in general.]

Bets hedged as they may be, I haven’t really experienced any of the negative things some people have written about at the beginning of the program. I had a very, very mild headache at the end of each of the first two days, but I’ve had no upset stomach and honestly no particularly strong cravings. Yesterday was the first day I even thought about wanting a Diet Coke.

That said, I have yet to experience anything particularly positive either. In fact, the more I read about the Whole30 in It Starts with Food, the more antagonistic I felt toward it, and at this point in the program, I’m feeling mostly ambivalent. I honestly didn’t buy a lot of the science they put forth in the book that was supposed to convince me not to eat things like legumes and dairy. And after some time on the program I’ve developed a few other criticisms.

The authors claim that food should be enjoyable. But the very nature of this program makes it not so! For the one thing, for the first 5 days of the program, I felt like all I was doing was thinking about food, cooking, and cleaning the kitchen. Normally Andy eats breakfast at work, but his meal would normally be oatmeal or granola with yogurt, so in order to replace that, I’ve been needing to provide breakfast, lunch, AND dinner options, which is new. So I felt like every time I turned around the kitchen was dirty again! Since I had more time to plan, this week has been much better so far, but it definitely takes a lot of work.

Secondly, this program makes socializing hard. (And I know the authors say, “this is not hard. Quitting heroin is hard. Beating cancer is hard. […] Drinking your coffee black Is. Not. Hard.” I get that. But the Whole30 is, without a doubt, difficult some days!) I hate being “that girl” at restaurants or parties, having to ask what is in everything. We’ve managed a few outings since starting it: one featured a barbecue buffet, so we just left off the sauce, and one was for brunch, so Andy got eggs and breakfast meats and I got a salad. Last night my church community group had a cookout, and I know for a fact there was some honey in the sauce on a sweet potato I ate, but I decided to let it slide. I can only do so much.

On the flip side, among these outings I have passed up macaroni and cheese, chocolate cake, sushi at a work lunch, cake again at work, and various goodies at the cookout, and I have to admit that it feels pretty good to use that willpower muscle.

The other issue I take with the presentation of the Whole30 plan is their discouragement of eating snacks. They suggest that you eat enough lean protein and good fat at each meal so that you are not hungry until the next meal–and in fact, so that if you for some odd reason have to skip your next meal, you would be okay. They say, “Avoid snacking between meals because it turns your eating habits into grazing, and grazing can disrupt the normal functioning of leptin, insulin, and glucagon, and may promote inadvertent overconsumption.” Okay. But as one who has always struggled with blood sugar fluctuations, I have lately quite successfully structured my days around 3 meals and 2 snacks. I eat specifically portioned snacks, and I don’t graze except for on occasion. When I sit down to eat my snack, I eat my snack and that’s it. I normally eat some nuts or a granola bar a few hours between lunch and breakfast, and some sort of fruit or veggie between lunch and dinner, and I don’t see what’s so bad about that! For the sake of the program I’m giving it a try; I’ve actually started being able to make it from breakfast to lunch, but after lunch I get raging hungry around 5:00, still a few hours before we’ll be eating dinner. I can feel grossly stuffed at lunch and still get hungry like that–and I don’t think they would promote “grossly stuffed!” I just hate that this program that is supposed to promote healthy eating has made me feel guilty about one of my eating habits for the first time in my life.

So what are the positives? I’ve discovered some delicious new recipes that I think I’ll keep in my repertoire. I’ve been able to flex my meal-planning muscle and practice using willpower. And I get to think about what specific foods might be “worth it” to incorporate back in later. I’m glad the authors remind us that ”the Whole30 is just a springboard into a lifetime of healthy eating habits. We don’t exepect (or want) you to stay on the program forever, or eat according to our rules all the time! Think of the Whole30 as a tool, allowing you to build new, sustainable habits that will be with you for the rest of your life.”

That’s what’s getting me through so far, since I haven’t had any “magic” to report, but I’ll let you know if anything changes!

I’m linking up to Works for Me Wednesday at WeAreThatFamily.com! 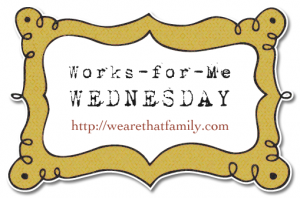