Why I Think I'll Stay

The places I’m from are complicated, y’all, and I love them in spite of the many reasons it would be easier not to. 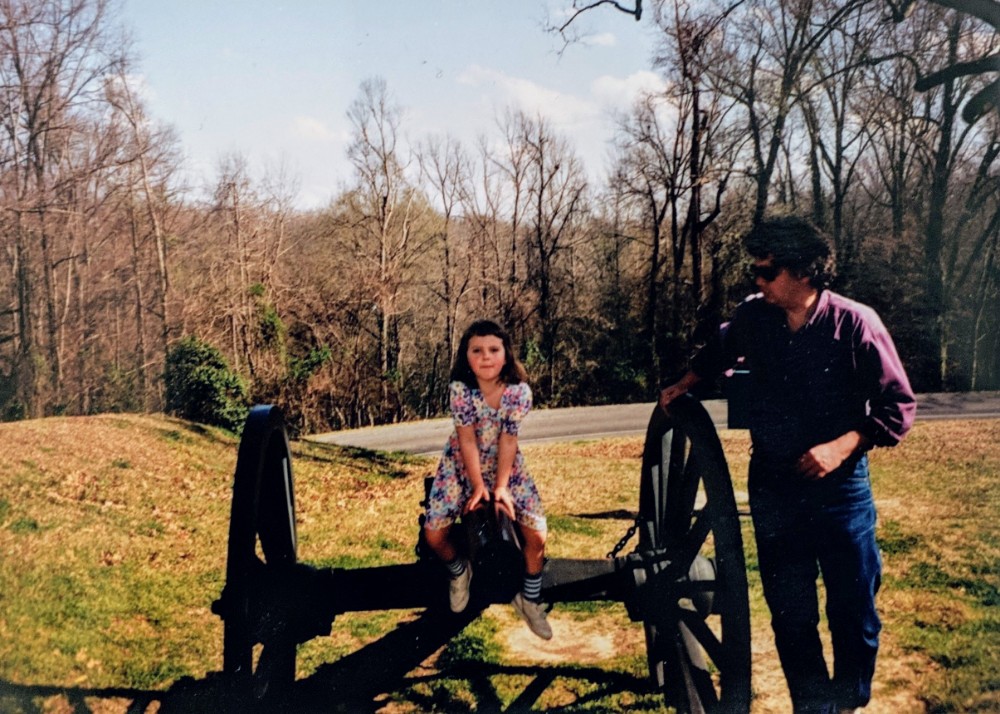 What I love is the first sip of ice cold sweet tea through the straw of a 24oz styrofoam cup on an afternoon when you’ve sweated out approximately half your body weight just walking to the restaurant door.

I love the muscadine vineyard in Canton, Mississippi where we went twice a year, ostensibly to prune the vines and pick the fruit, but more importantly to eat sticky-sweet muscadine juice popsicles and climb trees and play by the scuzzy cowpond we weren’t supposed to swim in and where we kids knew we were safe and surrounded by all the adults who cared about us.

The Sunday school class of a church on a tiny blacktop road just out of cell service that lets you interrupt them in your sweaty hiking clothes to use their landline phone when you get a flat tire and then waits with you until the tow truck comes to patch it.

The smell of honeysuckle that surprises you on a run and makes you feel like you’re 5 years old again swinging in your backyard waiting on your dad to get home from work.

It’s not a lie that things move a little slower down here. You might say there’s a grace to our days and people literally do smile at each other on the sidewalks and we know just when the occasion calls for Grandmother’s pearls.

I’ll admit I don’t love the Palmetto bugs that flourish in the languid humidity and scuttle away as you walk the sidewalks of your college campus at night. (They’re really big, y’all, and I’ll spare you a link to the Wikipedia article.)

I don’t love driving through little towns that wear Confederate flags and everything they stand for as if they’re badges of honor, and I especially don’t love how so many folks can’t even seem to see what’s so wrong about that sticker on their truck anyway.

It’s hard going to a place like Stone Mountain and simultaneously appreciating its greenery, the lake, the natural beauty, the improbability of a lump of granite rising out of the earth like that, while also hating that you drove there on a road named Robert E. Lee Boulevard and knowing that the carvings on its side periodically spark white supremacist fervor. (And I say this as a white person; how much worse must it feel for anyone non-white and especially anyone Black to hear the GPS tell them to turn onto that particular road?)

It’s painful to have a Black coworker who’s always lived in California confess that she’s wary of coming to your city because of the reception she fears she’ll receive. (And yet I respect her truth and am honored that she shared it.)

I don’t love the legislators that keep getting things so, so wrong. I want to say it’s not my circus and they’re not my acrobats. I want to drink a few Bushwhackers and bury my head in the perfect white sand of Orange Beach and Rip van Winkle my way to days that don’t feel like a prequel to The Handmaid’s Tale.

But the problem is, this is my circus, and I’ve chosen these acrobats.

I hear people who have never felt the love of this place deep down in ever bone of their body say that everyone, especially women, should leave this state that I call home right now, but they can’t know how that sentiment lands and how impossible it feels to consider leaving this South, especially right when I believe she needs people like me the most.

She needs people that believe in women’s autonomy over their own bodies and aren’t afraid to be loud and to shout for what we deserve.

She needs people that truly believe those words that all men are created equal, and also that some men love other men and some people who look like men are actually women and that maybe we should have used a more inclusive word than “men” in the first place.

She needs people who are going to follow Congressmen John Lewis and make good trouble until she looks a little bit more like what we think the place our hearts can’t help but call home should look like.

She needs companies to dig in and fight with all the resources at their disposal rather than boycotting and moving their operations away and leaving people jobless and communities poorer and land emptier.

There are things in the news right now that raise every hackle on my 5’6”, Caucasian, female-presenting body and I get the urge to flee. I do. I’d be remiss if I didn’t acknowledge that I actually have the resources and the ability to leave. But I’m thinking about the people without those means who would be even further marginalized if I and everyone else who could do so left them behind. Those are likely to be poor folks, folks of color, queer folks in rural communities, the people who are doing so much of the heavy lifting when it comes to community organizing and pushing for social change. There are folks who aren’t able to choose whether to stay or to go.

And so, since I have the choice:

I think I’ll stay. I think I’ll try to do the next right thing. I think I’ll volunteer my time, and donate some dollars, and keep riding public transportation to work, and keep shopping locally, and keep calling my legislator even when I’m dismayed that he’s never yet voted how I would have wanted him to.

I think I’ll stay, even though you may not understand why, and instead I’ll tell you all the reasons it breaks my heart to hear you casually tell us we should leave.

I see her taking photos in front of the vivid pink azaleas in her front yard, the one with the 3 pine trees that drop their prickly seeds on the pebbled front path so she knows she can’t walk down it barefoot at certain times of year. 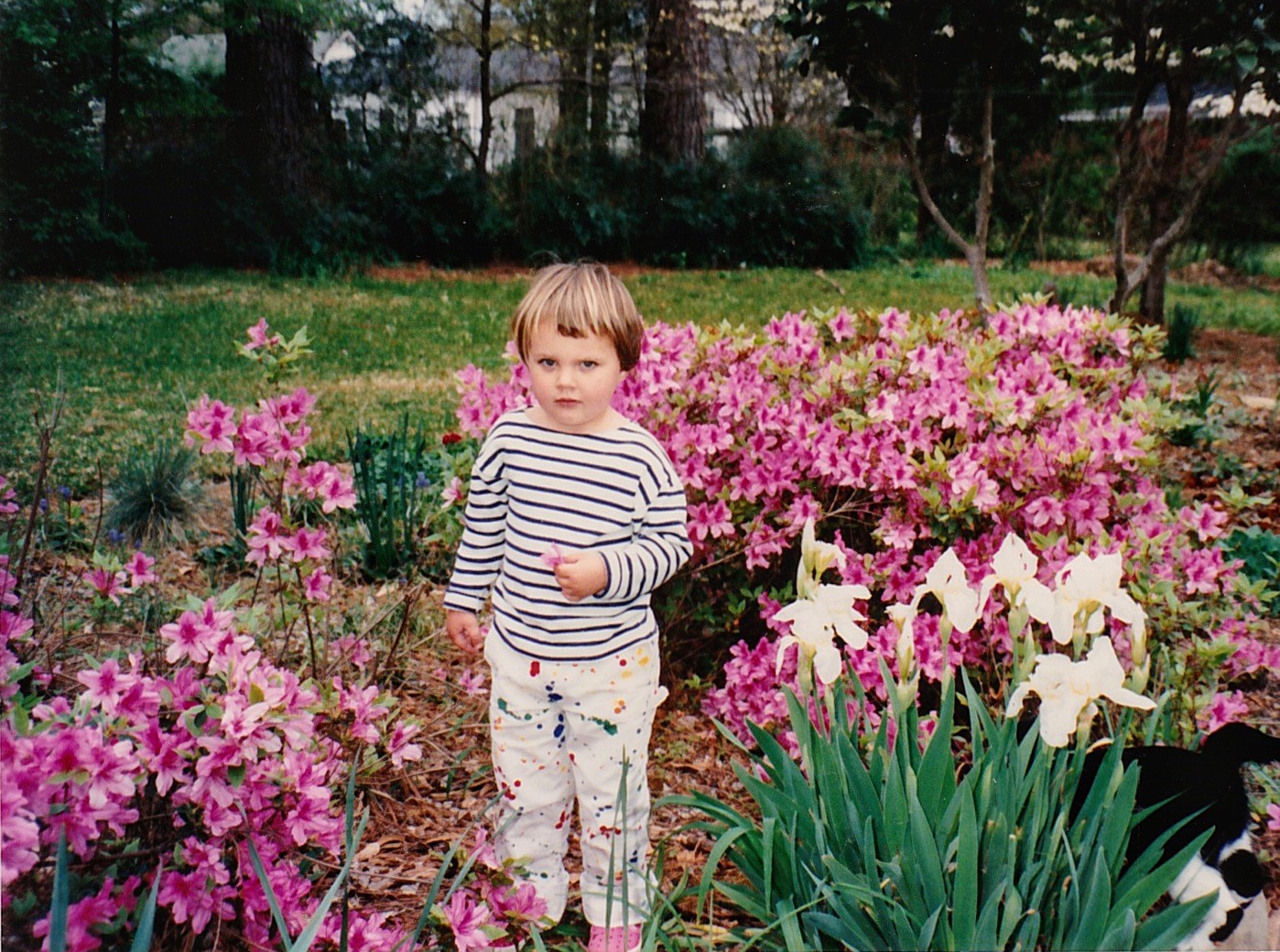 I see her reading books with protagonists who look like her and learning about computers and also keeping her toenails painted because it just feels proper, but maybe choosing one of those OPI colors with the perfect name like Madame President, and maybe that won’t be a pipe dream in her world.

And if it still feels simple to say we should leave, I invite you to come visit me so I can try to show you why I can’t. I’ll take you to the National Center for Civil and Human Rights, a place that’s grappling with hard, hard problems and that corporations like Coca-Cola have fully embraced by making free for everyone during Black History Month. I’ll take you to Mary Mac’s Tea Room where we can eat fried chicken and drink the potlikker from slow-cooked greens and inhale the sweetest dang sweet potato souffle in a dining room full of white people, Black people, blue collar folks, families, men in suits, and everyone else who just knows good food when it’s set in front of them. I’ll drive you down Martin Luther King’s street where we can see the park rangers in their out-of-place looking wide brim hats strolling down a city sidewalk and maybe we’ll be listening to country music because those songwriters really do know how to tell a story. I’ll take you up into the foothills of the Appalachian Mountains where it’s not just the hike up to an overlook that’ll take your breath away (that is, if it’s a time of year when the trees aren’t full and green and blocking the view). We’ll sweat and then we’ll shiver in the AC that’s turned up too high in every establishment you go into in the summer and we’ll buy coffee brewed by refugees and arepas made by a Venezuelan woman and we’ll go watch Gone with the Wind on the big screen at the historic theatre that the city’s first Black mayor helped save before they named the airport after him. I told you it was it complicated, and I meant it.

It hurts to love this South sometimes, but it would hurt me even more to leave.

Maybe you love a place like that, too, and can spare us a little empathy while we muddle through.

Maybe she won’t always be so hard to love.