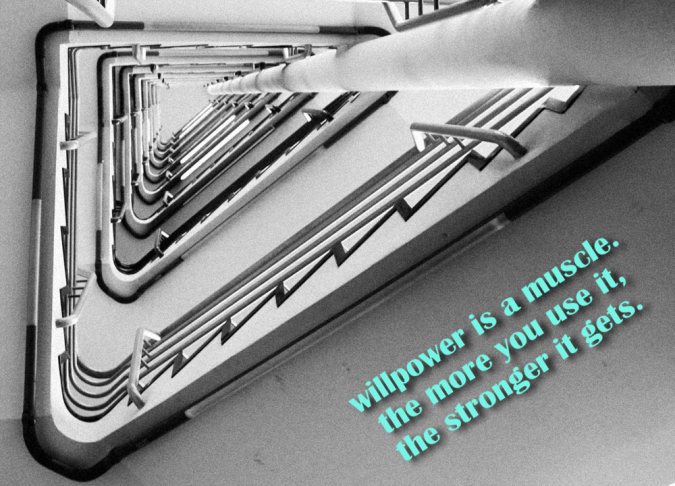 willpower is a muscle. the more you use it, the stronger it gets.

This quote has been floating around on Pinterest for awhile, and it really resonates with me. (Though, the one I’ve seen there has a skinny, scantily clad female as the image, which doesn’t inspire me to anything, so I made this one myself!) It doesn’t just sound good–the concept is beginning to be backed up by research as well.

I’ve often felt like I had particularly poor willpower. I can stop myself short of eating, say, an entire cake (because I also have a strong sense of consequences and know that would make me feel awful), but when it comes to things with less clear consequences I am less able to persist. For example, lately I’ve been trying to get up and go to the gym before work. I go into work at 10:00, so I don’t even have to get up particularly early….but so many mornings it’s easier to loll around in bed for just long enough to miss my window of available time, or to convince myself that I have things to do around the apartment instead.

Another place where I really struggle with willpower is at our team trivia games on Tuesday nights. We play at a local Mexican restaurant, so there are endless amounts of chips and salsa, and someone at the table usually orders cheese dip as well. We don’t play until 8:00 pm, so A. and I have usually already eaten dinner. I don’t love the chips, salsa, OR cheese dip there, and I theoretically am full. Yet I find myself almost every week chowing down on them as if there were no tomorrow. And I always feel guilty about it.

One week recently I ate a LOT of chips at trivia and was just disgusted with myself. (Well, perhaps that’s a bit strong. Disappointed in myself would be better to say, I guess.) But the next morning I managed to get up and go to the gym. I thought, “I might not have resisted the chips, but at least I can go to the gym today!” I know it’s not a 1 for 1 trade. It’s not like I specifically burned off the calories from the chips on the elliptical. It’s not even so much the calories that I’m worried about; I’m more worried about the fact that I can’t seem to control myself sometimes. I don’t like that feeling at all, and I find it heartening to think that I can improve and strengthen that ability!

I’ve gotten a lot better lately when the alarm goes off at reminding myself that I never regret going to the gym; rather, I only ever regret NOT going! And I think to myself that willpower is a muscle, and I can strengthen it by using it.