A couple of weeks ago I was selected through Rachel Held Evans’ blog to be part of the launch team for her newest book, A Year of Biblical Womanhood. 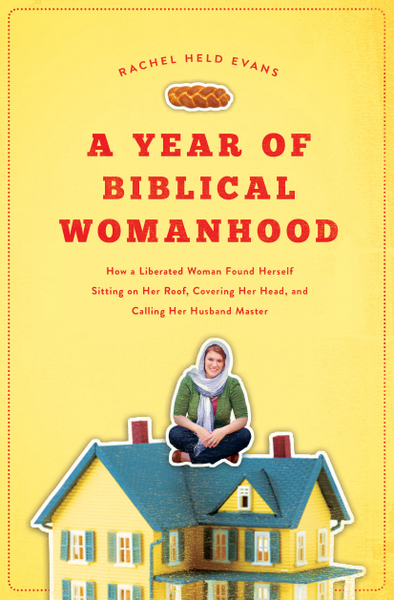 The book officially launched a week ago, so you may have heard about it by now. Rachel has appeared on numerous talk shows and been featured in magazines and on radio segments. The book is currently #2 on Amazon in the “Theology” category and not far behind that in Spirituality and Christian Living. It’s making decently-sized waves in evangelical as well as more liberal Christian circles.

I’ve been reading Rachel’s blog for several years now so was able to follow along with frequent posts as she executed the project. Here’s the gist of it: Rachel grew up in a conservative Evangelical church where women were not allowed to preach and were encouraged to assume traditional roles in their homes and marriages. Rachel grew up and started asking hard questions. She got married, and she and her husband Dan found that they somewhat inadvertently eschewed all the traditional roles they had assumed they would embrace and created for themselves an egalitarian marriage. Rachel started delving into these issues and found a whole wealth of literature espousing the “Biblical womanhood model,” which she came to view as a misinterpretation of the Bible she loves. So, she embarked on a somewhat kooky project: for one year, she would follow every edict in the Bible that said something about women. She ended up doing things like wearing a headcovering, calling her husband Master, praising him at the city gates, cooking through a Martha Stewart cookbook, and caring for a computerized baby. (You can read more about it here and check out some FAQ’s.)

I expected to love the book. I really did. I was excited about it from the first wind I caught of it on Rachel’s blog. It seemed like a really interesting experiment that could make a lot of bold claims about the role of women in Christianity. But honestly, I had trouble getting through it. First of all, the projects Rachel chose seemed odd to me. Many of the rules she followed were from the Jewish culture, and she even made an orthodox Jewish friend who directly guided her through many of them. Yes, I am well aware that Christianity grew out of Judaism and that the culture in which Jesus preached and lived was Jewish. I am well aware that the entire Old Testament follows the story of the Jews. But to me, if Rachel was trying to refute the likes of the Council on Biblical Manhood and Womanhood, choosing Jewish customs was not the track to take, because I don’t feel like these are the scriptures that people get hung up on.

Secondly, while the projects themselves were fascinating, in practice the book felt disjointed to me. Rachel tried to tell us about so many projects that I felt shorted on most of them. An entire experience had to be boiled down to just a page or two. Perhaps I’m spoiled because in reading her blog I’ve gotten a more fleshed out, longer term view of things, but I wanted more detail about fewer projects–maybe the ones that impacted her the most, for example.

And my final concern is that this is not the book that is going to convince a Christian who ascribes to a patriarchal worldview to change his or her mind. I expected to have a lot of “ah hah!” moments while reading this book, but in fact I had very few. And if that was my experience, as someone who already mostly agrees with Rachel’s stance, I can’t imagine what someone deeply entrenched in the notion that she has to be a silent wife and homemaker would make of it.

Here’s where I often run into problems with feminism: if the point of feminism is to allow women the freedom to choose what they want to do with their lives, than what of the women who decide to be homemakers and stay-at-home moms? I often feel like those women are belittled by the staunch feminists as simply being part of a partiarchal hierarchy that they need to escape. But you know what? I believe, as unpopular as it may be, that men and women are different. That doesn’t mean we shouldn’t be paid the same or have the same rights, but I think that at root, we have some fundamental differences, and I also believe that’s Biblical. And I think that a woman choosing to live out what she feels to be her deep calling is beautiful. Just because men and women are different doesn’t also mean that all women and all men are the same as each other, but I think there are things we each are better suited for. Not all women who stay at home or choose to be the primary homekeeper are doing it out of a sense of obligation to the patriarchy or because they’ve been forced to. I work, but I also cook dinner every night, do all of the laundry and much of the cleaning, and pour Andy a beer occasionally when he gets home from work. I do these things because they bring me great joy and because I feel that I am well-suited to keeping our home pleasing. Am I less of a woman because I have chosen to be this way? I don’t think so. So I’m tired of feminists making me feel like I should want more for my life. I have crafted a life that makes me happy, and will continue to craft it as my circumstances evolve, and I don’t think it’s worth any less just because some of my choices happen to line up with a conservative viewpoint of marriage and the family.

So, all that said, I think A Year of Biblical Womanhood is a great rallying cry for a specific subset of people: women who grew up in conservative churches or families that they’ve since pegged as oppressive who have changed the way they live to a more egalitarian position for women and men. Plenty of bloggers and tweeters that I follow are in that category have shouted hoorays over this book. But for people like me who perhaps straddle the fence, and especially for people who haven’t toed up to the line at all, I’m not sure what the book will do.

I’m sounding terribly harsh, and I don’t particularly want to be. I’ve come to feel that I know Rachel from reading her blog, and I like her, and I think she’s doing great things in the world. The writing in the book has moments where it absolutely shines and passages that assert truths in a manner that can’t be ignored.

And some of her conclusions are absolutely irrefutable to me: that “The Bible does not present us with a single model for womanhood, and the notion that it contains a sort of one-size-fits-all formula for how to be a woman of faith is a myth.” She also writes, “If love was Jesus’ definition of ‘biblical,’ then perhaps it should be mine.” And this: “We all wrestle with how to interpret and apply the Bible to our lives. We all go to the text looking for something, and we all have a tendency to find it. So the question we have to ask ourselves is this: are we reading with the prejudice of love or are we reading with the prejudices of judgment and power, self-interest and greed?”

But to be honest, this book has me all confused, because I’m finding myself typing this post out of a much more conservative stance than I thought I had in me. When I read the section of A Year of Biblical Womanhood that dealt with Proverbs 31, rather than feeling freed by Rachel’s conclusions about it (“The woman […] in Proverbs 31 is not [an] ideal […] she is present in each of us when we do the smallest things with valor”), I felt cheated. I thought, “But wait a minute–I kind of WANT to be that woman!” So now I’m just all in a tizzy and I’m not sure what sort of woman I am, or why. If nothing else, the book has got me standing back at my proverbial drawing board of Self, and that can’t be a bad thing.

I guess I can rest in one of Rachel’s conclusions, that “One does not have to understand to be obedient [to God]. Instead of […] that intellectual understanding which we are so fond of, there is a feeling of rightness, of knowing, knowing things which you are not yet able to understand.” Hopefully, with the “prejudice of love,” that will get me somewhere.