I live in a books bubble that makes me feel like I don’t read enough. Me, of the book club, of the Kindle-always-in-my-purse, not reading enough! I never really thought about tracking my books count until I entered the blogosphere. It’s mostly Book Riot’s fault, and Money Saving Mom does it too. I’ve used Good Reads intermittently to track my books, and thanks to their “Your Year in Books” feature I am now intimately acquainted with the number of books I’ve read. I knew it would be coming, and so I actually spent several hours on New Year’s Eve day finishing the last 28% of a book so that I could count it toward 2014. 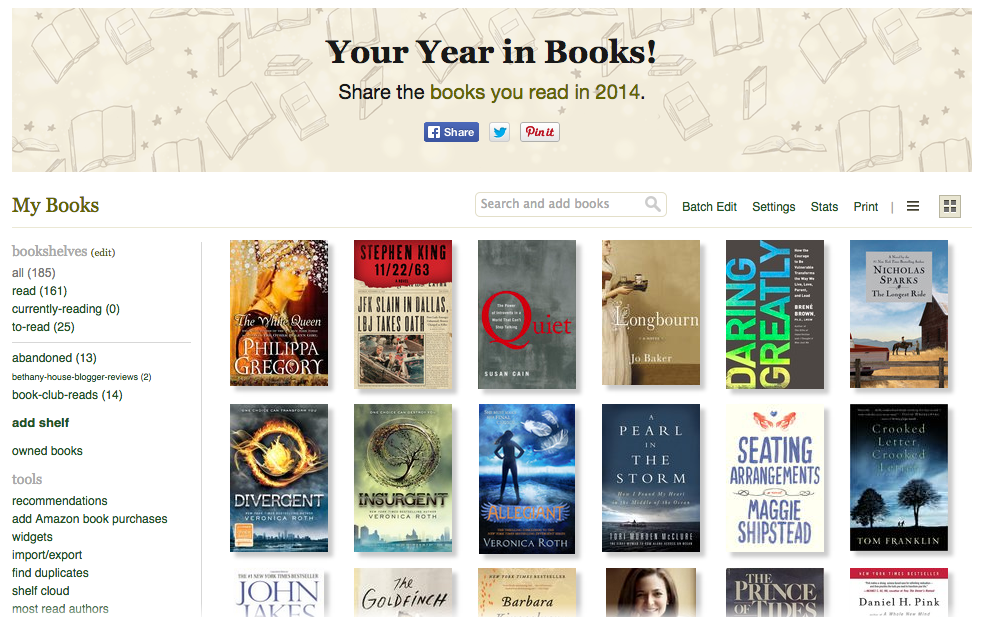 But do I really care about the number of books I read? It sort of gets at the fundamental question of why I read in the first place, which is a good one that I’ve mused around periodically here before. I read for enjoyment. I read to escape. I read to broaden my horizons. So mostly I don’t think I do care. I have a pretty epic books wishlist on Amazon that I may or may not ever get to the end of. I mostly select my next books on whims–sometimes I’m in the mood for fluffy fiction, others headier nonfiction. I just go with it. And I think that’s fine.

But just for fun, this year I’m going to participate in Book Riot’s Read Harder Challenge. It’s not a challenge based on the numbers. It works out to 2 books per month, which is more than I read some months this past year, but not an inordinate number. Rather, it’s more about the content of what you’re reading. The tasks aren’t time-bound, and you don’t even have to do them in any particular order.

Without further ado, the tasks and my picks:

Some of these will be NBD for me…a YA novel? Twist my arm, why dontcha?! A guilty pleasure? Woohoo! Others will be a little bit more, well, challenging, which is the whole point! An audiobook, a graphic novel–those are further outside my comfort zone. But it should be fun. There’s a Goodreads group for inspiration and accountability, though I haven’t copied anyone’s list suggestions verbatim.

I reserve the right to change my mind on any of these, but this is a starting point. I’m also open to recommendations (and, hello, Task #18: Recommended by Someone Else), especially in the audiobook and indie press categories. If I get really motivated I may even read multiples in some of the categories.

Half the fun of reading to me is picking whatever suits my fancy, so I’m a little nervous about embarking on such a structured list. But hey, since I’m not “working” full-time right now, I guess I should have more time to read!

Keep an eye out for periodic updates on my progress! I’ll be tweeting with the hashtag #ReadHarder, as will the other participants. Join us?