I'm always amazed at the proliferation of imitation recipes you can find online: Outback Steakhouse bloomin' onion. Olive Garden salad dressing. Etc. I'm impressed at people's ability to go home and recreate flavors they've tasted! I don't think I have that skill. BUT, I do enjoy following other people's instructions! Last week I tried this recipe for imitation Chick Fil A chicken nuggets I had pinned on Pinterest. It was my first time frying anything, so I was a little nervous, but my Dutch oven stood up to the task well. It was deep enough that hot oil wasn't spattering everywhere, and the heat-holding properties of the cast iron helped it seemingly stay at a consistent temperature. The oil wasn't hot enough for my first batch, but as it stayed on the burner and got hotter, the nuggets came out looking better and better. Each batch was a little browner and crisper than the one before. So that was one lesson learned. I also realized right before I mixed up the recipe that I didn't have any eggs, so I tried it with just the milk. Lesson learned number 2 is that I think the egg would have really helped the breading stick to the chicken. As I dropped each one into the oil, I could see clouds of flour floating off, and my oil was left looking pretty brown from the stuff that cooked up in it. But all in all this was a great experiment, and I would DEFINITELY make them again, especially with my increased knowledge about frying.

Here's the recipe, courtesy of Amy at My Name is Snickerdoodle. (P.S. Pinterest has become a big freaking deal! This blogger said she has literally gotten hundreds of thousands of hits to her blog since her recipe basically went viral on the boards.)

(I used canola oil and, like I said, no egg. I've always claimed that Chick Fil A nuggets tasted sweet to me, and the inclusion of powdered sugar here proves me right! One bit of breading that I fished out of the canola oil that had fried up on its own really did taste JUST LIKE a CFA nugget.)

In a medium bowl whisk the egg and stir in the milk. Trim any fat away from chicken. Cube chicken into bite size pieces. Place chicken in milk mixture,and cover. Let it 'marinate' for 2-4 hours in the fridge. This will make the chicken very nice and tender. In a gallon size resealable baggie combine flour, powdered sugar, salt and pepper. Seal and shake to combine. (I forgot to shake the dry ingredients before adding the chicken and it definitely would have helped--some nuggets ended up with more pepper, others none, etc. Whoops!) Place about 2 inches of oil (we used way less....more like an inch) in a medium deep pot. Over medium high heat (more towards the high side) heat oil until hot. Using a fork or tongs remove cut chicken from milk mixture and place in the flour mixture. Seal and shake until nuggets are completely coated. Place about a 6-8 nuggets into hot oil and let them cook until golden brown, turning half way through once the edge of your chicken starts to turn white. About 1 minute each side. (Mine took longer, probably because my oil wasn't hot enough. Or maybe I was just overly cautious about letting it cook enough.) Always double check to see if any chicken you make is cooked through. I always just make a tiny cut to see if it's pink. Remove and drain on a paper towel. (Lemme tell ya, that paper towel was nasty! I figure these must be healthier than actual fast food nuggets, because those surely aren't drained.) Repeat until all nuggets are cooked.

This was a really fun, pretty quick meal to throw together with some frozen, baked french fries and green beans! A. helped me out a bit throughout the frying process, and we had a good time figuring it out together.

Here was my final product: 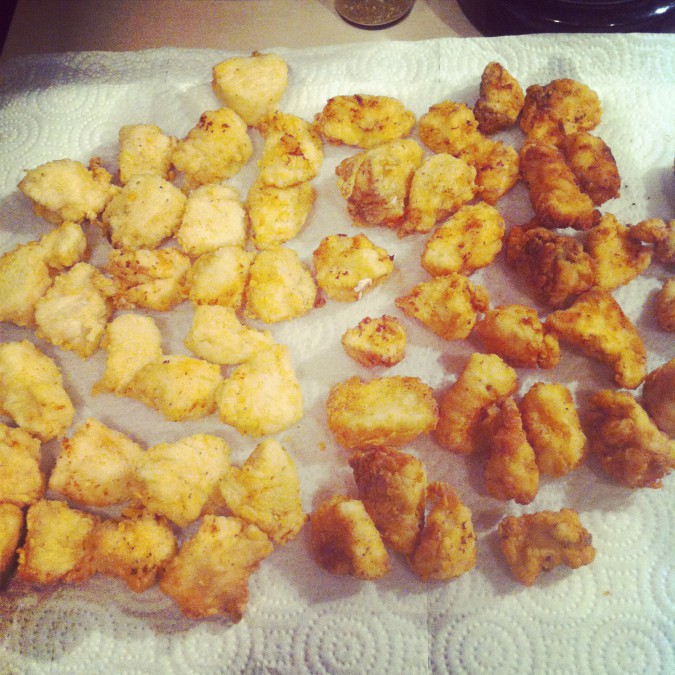 You can see the progression of color from left to right. Ha! We had a bunch left over, and they were okay reheated for lunch, though obviously not crispy anymore. This will be a fun recipe to add to my repertoire. 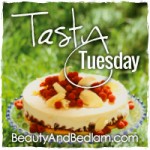 I'm linked up to the Tasty Tuesday Parade of Foods at Balancing Beauty and Bedlam!