Soup in a Bag?

I’ve had two problems lately that ended up solving each other! For one thing, I subscribed to the local paper via a Groupon not long ago, so we now get the Thursday and Sunday papers. (Don’t ask me why Thursday, but Sunday is for the coupons!) We can recycle the paper itself (which we honestly rarely read), but I’ve been wondering what to do with the bags. If we had a pet, they’d be perfect as pooper scooper bags….but we don’t, so I was back at square one. The second problem is that A. doesn’t like taking his lunch in an actual lunch box, preferring to just slip it in the outer pocket of his computer bag instead. I can see his point, I guess (not wanting to have to carry another bag), but when I’ve made delicious soup and want to send leftovers to work with him for lunch, I can’t! I’m too nervous that the container would leak and ruin his laptop (or even just the bag). 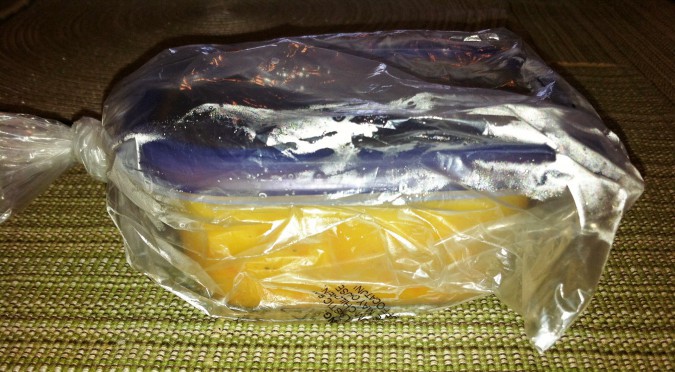 I realized that, while the containers I typically use are a little too big for a ziploc bag (unless I used a gallon-size freezer bag, which seems like a waste), they slide perfectly into one of the newspaper bags, which I can then knot to trap in any rogue liquid that spills.

Even if the bag gets thrown away immediately after A. eats his soup, at least it’s lived a second life! And plus, if we remember to do it, I think it can probably be recycled at the grocery store along with plastic grocery bags and ziploc bags. So, two dilemmas solved!

Have you had any creative solutions to a nagging problem lately? What do you do with old plastic bags?