the stuff we keep

This morning I started a month-long volunteer stint at a local non-profit agency. A new case manager was also starting today, and as her job is much more involved and sensitive than mine right now, she required training and time with the executive director. So, I was trustingly left alone with an old file cabinet and instructed to go through all the files and clean it out. (Coincidentally, this is pretty much how the first day at my last job went. I guess I must be trustworthy.) While I was a bit overwhelmed, seeing that I, as yet, know next to nothing about the day-to-day operations of the organization and was worried I might trash something that is actually useful or necessary, I found that most of the contents were readily categorizable. I ended up with several stacks: old board minutes and budget reports (that may or may not be necessary to keep), grant and foundation application information (to keep), potentially useful or interesting (for the director to sort through himself), and trash. I also ended up with a large stack of empty, and thus reusable, folders.

I’ll be honest, as much as I love organizing, it was a bit of a tedious process. But what I continually found fascinating was opening a new folder to discover what someone once decided was worth keeping. In many cases, there was a hanging file folder containing a manila tabbed folder containing…a single brochure. Someone had apparently painstakingly attempted to create a cabinet full of community resources. However, at this point, many of the brochures were so out of date that, if the organization even exists anymore, the information has surely changed. And secondly, there are entire non-profit organizations dedicated to keeping records of what agencies exist and providing resource manuals to anyone who requests one. Plus, there is now the internet. So needless to say, most of the brochures went into File 13, if you know what I mean.

Having recently moved, and even more recently reorganized our walk-in closet, I’ve done a lot of thinking lately about what’s worth keeping. In fact, even though we got rid of several car trunkfuls of stuff before we moved, I managed to find another sizable pile of giveaways this past week. I am constantly scrutinizing my belongings and find myself, over time, becoming willing to part with things that I once thought were eternal keepsakes. I’m a sentimental person, but I’m trying hard not to let my sentimentality manifest itself in too much stuff.

There are some things I’ll never part with. For instance, the two dolls I have had practically since birth. The first was a gift shortly after I was born, and I became so attached to her that my mom bought a second, identical doll in case the first one ever got lost or damaged. Unfortunately, I somehow discovered the second one and simply added her to my cadre. We were quite a threesome. The dolls had voices and personalities and life stories that I shared in copious detail with my mom and the tape recorder she often left me with. They are now grey where the used to be pink, and one of them is smushed practically to fabric. I doubt any future child of mine will want to play with them. But they’ll sit somewhere on a shelf for as long as I can envision. 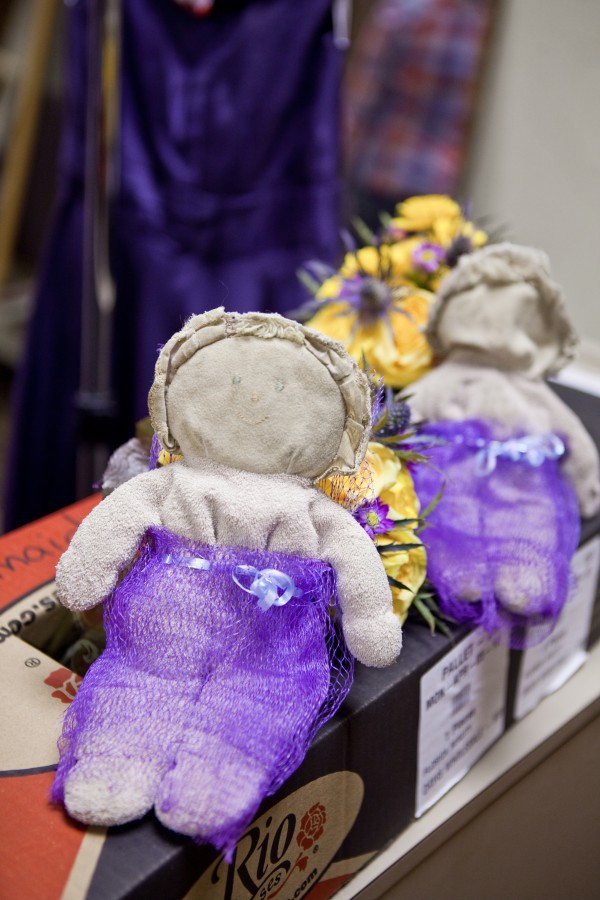 Here they are in their wedding day finery.

Other things, though, I have seen fit to relinquish. For example, gifts that, while nice, I know I will never use because they’re not my style. The numerous binders and dividers that my mom trained me to keep tidy and reuse every school year. Some picture frames that we no longer have room for. It’s interesting to note how difficult that is for me, though, and how many purging cycles it takes to make that decision.

What are some things you have trouble letting go of that you probably need to? What will you cherish forever? And what do you have no problem chucking as soon as the opportunity arises?